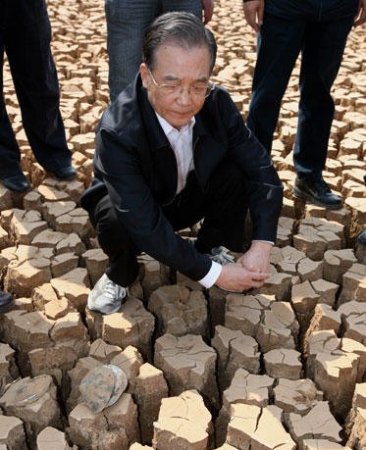 Wen visits Yunnan countryside
This past weekend, Chinese Premier Wen Jiabao visited one of the areas of Yunnan hardest hit by the drought to observe the plight of Yunnan's countryside and deliver the message that no one will go without drinking water.

During his visit to Luliang county in Qujing prefecture, Wen viewed the Degehaizi reservoir, which is essentially dry. At present, some Luliang residents have to take a four-hour ox cart to get water from the nearest town.

Wen's visit underscores Beijing's growing concern regarding the drought in Yunnan, Guizhou, Guangxi, Sichuan and Chongqing, which has affected 50 million people so far.

Kunming's agriculture, horticulture sectors hurting
Total agricultural losses in Kunming due to the drought have reached 700 million yuan (US$102.5 million), according to a Kunming Information Hub report.

Horticulture has also taken a big hit from the drought. Kunming is China's largest fresh flower production and export base, and just as with food crops, irrigation for growing flowers has been insufficient.

The effects are being felt around China, where Yunnan supplies 80 percent of the domestic flower market. Beijing floral shops are reporting a 30 percent increase in flower prices.

Kunming airport runway closed for repair
Even Kunming Wujiaba International Airport is feeling the effects of the drought. Major cracks on the airport's only runway appeared last week, leading airport officials to close the runway from midnight until 7:30 am daily March 16-20.

It is believed that falling water tables below the runway plus the stress of roughly 500 daily flights caused the cracks.

Airport officials said the new airport being built 28 kilometers northeast of downtown Kunming will not be vulnerable to falling water tables because it is being built with a new technology not used at the current airport.

Wen is too late!