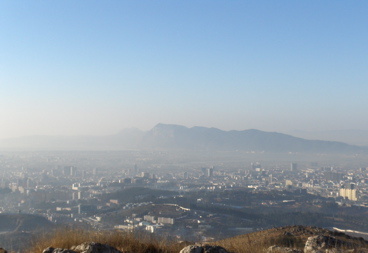 Just over a decade ago, most Kunmingers got around via bicycle, bus or the occasional taxi. Today it has one of the highest car ownership rates in China and a second-hand car market that is starting to pick up steam – which will make cars affordable to a new wave of first-time car owners.

When car ownership in Kunming was starting to boom at the beginning of the last decade, there was little evidence to suggest that the local government cared about the city's streets becoming increasingly choked with cars and exhaust.

In the minds of many Kunming residents, the city's previous attitude toward traffic was epitomized by former deputy mayor Hu Xing (胡星), who was found guilty in 2007 of taking more than 40 million yuan in bribes while serving as deputy director of Yunnan's Transportation Bureau from 1995 to 2006.

In the last two years the Qiu He-led government has been busy with projects including construction of a 'turtleback' flyover at Xiao Ximen, two flyovers on Dianchi Lu and the complete overhaul of the second ring road and roads connecting Kunming with surrounding cities.

Now it appears emissions are in the government's crosshairs.

The Kunming Environmental Protection Bureau announced yesterday that it will introduce mandatory annual emissions testing starting February 1 that will affect as many as 750,000 motor vehicles on the roads of the greater Kunming area.

The testing, which will include taxis and diesel vehicles such as buses and large trucks, will be a part of each vehicle's annual safety test. Testing will carry a charge of 70 yuan for private passenger cars. The process is expected to take about five minutes.

The bureau cited Kunming's geography – lying in a smog-trapping basin – and high levels of carbon monoxide, nitrogen oxide and unburned hydrocarbons in the air along major streets as reasons for implementing the testing.

According to local media, levels will be set such that a passenger car without a modern, functioning three-way catalytic converter will be incapable of passing the test.

The report quoted one car owner voicing frustration over having to pay 70 yuan per year on emission testing for the car that he bought new in 2008. "It's not a lot of money," he said, "but overall it feels a bit redundant."

Yunnan aiming to improve driver safety
In other traffic news, the Civilization Office of Yunnan Provincial Public Security Bureau has announced that from this year until 2012 the province will be implementing what it calls a "Civilized Traffic Action Plan" (文明交通行动计划).

The announcement came on the heels of the release of automobile accident statistics for 2009, in which it was reported that there were 5,075 major accidents with 1,888 deaths and 6,549 injuries in Yunnan last year.

With a focus on numbers typical to the Chinese bureaucracy, the project contains goals such as: "boycotting the six dangerous driving behaviors," and "advocating the six civilized traffic behaviors".

Some examples of habits that the project intends to curb are talking on phones while driving, random lane changes, and running red lights.