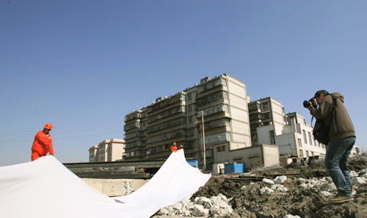 Caohai tunnel mishap
A piece of a tunnel that is being constructed under Dianchi's northern Caohai section appears to have fallen yesterday in the early morning hours. The incident is being called a "partial collapse" by local media and "a problem emerging from the concrete-pouring process" by a representative of the construction company involved. So far no casualties have been reported.

Local media, however, have been hampered in their efforts to report the story by an unwillingness of the construction company, Kunming Yuanding Construction and Development Company, to allow reporters into the scene.

Also, according to the Kunming Information Hub report, as of 1:00pm Monday afternoon, a staff member at the Municipal Work Safety Bureau was reported as saying that the bureau had yet to be notified of the incident, which is believed to have occurred around 20 minutes past midnight. Meanwhile, at the tunnel, workers were ordered to hold up a large tarp (pictured above) to block reporters from seeing or photographing the scene of the incident.

This is the second major construction accident that has been reported on this month, following the fatal collapse of a bridge on January 3 that was being constructed at the new Kunming Zhenghe International Airport.

The new tunnel, which is 2230 meters long and Yunnan's first underwater tunnel, will link the southwestern suburbs of Kunming to the Kun'an Expressway. It was expected to open in June of this year, though it is unclear if this incident will change that expectation.

Development threatens Kunming's water supply
Add another blow on top of reports of deteriorating water quality in Yunnan and water shortages in Kunming: new construction in and around Kunming is tainting municipal water sources and threatens to leave the city without enough safe drinking water.

In a story for the online news outlet Circle of Blue Water News, author J. Carl Ganter takes the example of the construction of the new Zhenghe International Airport in Kunming to show how Kunming's karst topography makes the city particularly vulnerable to disruptions to its water supply.

"Karst" refers to areas underlain by soluble bedrock—limestone in Kunming's case. Over time, falling rain washes carbon dioxide into the rock, creating carbonic acid, which in turn dissolves a series of underground tunnels and chambers. This means that in a Karst area water can travel long distances underground without undergoing any natural filtration processes.

The development of the new airport—slated to be China's fourth largest—has involved workers flattening huge areas of limestone karst. In turn, local researcher Liu Hong, of the Yunnan Institute of Geography has seen plummeting water quality and rocketing levels of sediment in the Qinglongdong spring, which supplies Kunming's municipal water system.

As development expands around Kunming, the same story is repeating itself in the many small springs and reservoirs upon which Kunming depends for drinking water.

Yunnan to draft low-carbon action plan
In a slightly more encouraging piece of environmental news, the Asian Development Bank is announcing that it has provided a US$400,000 grant to help the Yunnan government craft a plan to boost efficiency and curb emissions in the province.

With the province consuming energy equivalent to 76 million tons of coal in 2008, even a 1% savings in energy usage would result in a reduction of 1.5 millions tons of carbon dioxide emissions.