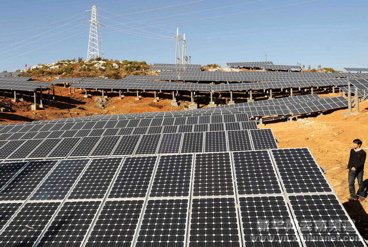 Shilin solar plant begins operation
The first phase of the 66-megawatt photovoltaic solar power plant in Shilin, about 70 kilometers outside of Kunming, went online and began feeding the electrical grid at the beginning of the month, according to Xinhua Net.

The 9.1 billion yuan project is being jointly financed by Yunnan Power Investment New Energy Development Company and the Chinese photovoltaic manufacturing giant Suntech Power Holdings. It will eventually include 100 megawatts of experimental and demonstration solar capacity in addition to the 66 megawatts of grid-connected capacity.

For now, the Shilin plant is the largest photovoltaic solar project in China, and perhaps Asia. It will, however, eventually be dwarfed by a planned 360-megawatt project north of Kunming and a planned one-gigawatt photovoltaic installation in Qinghai province's Qaidam basin.

Although it remains unclear whether the planned capacity of the Qaidam project will ever be reached, the first 30-megawatt phase of that project is already under construction.

As a point of comparison, a large coal-fired power plant might have a generation capacity in the range of 500 megawatts to one gigawatt.

Yunnan foreign trade dropped in 2009
Official statistics for Yunnan's trade with foreign countries were released last week. Yunnan's foreign trade amounted to US$8 billion for 2009, with US$4.5 billion in exports and US$3.5 billion in imports. Overall trade fell by almost 16.5 percent compared to 2008, with a 9.5 percent decrease in exports and an almost 24 percent drop in imports.

Although the drop seems rather precipitous, Hou Liqun, Secretary General of the Yunnan Association of Enterprises with Foreign Investment was quoted in the Spring City Evening Post as saying that, "the data is better than many people expected."

Hou also expressed a belief that Yunnan's foreign trade will increase over the course of 2010, partly following in the wake of the global financial recovery, and partly on the basis of opportunities inherent in the new ASEAN Free Trade Area.

Yunnanese among earthquake victims
Three peacekeepers from Yunnan were among the eight Chinese nationals that were killed in the magnitude 7.0 earthquake that devastated the Haitian capital of Port-au-Prince and surrounding areas last week.

All eight died in the collapse of the Port-au-Prince building housing the U.N. Stabilization Mission in Haiti, where they were attending a meeting.

Their bodies were returned to Beijing on Monday and family members were expected to attend a memorial service today.

Kunming to Sydney or Melbourne via Guangzhou
Aussies living in Kunming might be interested to learn that China Southern Airlines recently announced new routes connecting several Chinese cities, including Kunming, to both Sydney and Melbourne via the airline's Guangzhou hub. In its press release, China Southern claims that flying through Guangzhou will shorten the routes by two hours compared to connecting through Shanghai.