Beijing's punk-turned-NewWave-Electro band New Pants took the stage at the Speakeasy last night. Since the Pants' formation in 1996, they have gained acclaim for their entertaining music videos and retro fashion tastes.

The 200-some people at the Speakeasy saw that despite the image-driven hype surrounding the band, they put on a smoking live show.

After Kunming band Meigui Yuan (Rose Garden) finished a spirited 80s Metal-inspired opening set, the Pants took the stage, adjusted their synthesizers and after a few mumbled words, broke into the title track from Dragon Tiger Panacea, their new album.

The first half of the show featured a number of tracks from the October release. The chorus to crowd favorite "Bye Bye Disco" was screamed by everyone in attendance. Guitarist/vocalist Peng Lei, clad in a "God Save the Queen" black t-shirt barked choruses and crooned verses. Pang Kuan, programmed mesmerizing waves of sound and whipped the crowd into a frenzy with his spastic dancing to "Aireibadi" (Everybody). Bassist Lobo stared and lunged every so often to hit his low notes.

As the band played the closing bars of the Smiths-esque "Yu Zhai" (Imperial Dwelling), a kind of trance seemed to settle on the crowd with every "He can't stop," that Peng Lei bellowed. The last note washed over the crowd and the place erupted.

New Pants proved to be deft musicians, often switching instruments, which gave them a vast range of sounds. Lobo nonchalantly manned the drum kit with surprising skill. As their hour-plus set moved from new material to their previous punk-pop incarnation, the crowd pogo-ed and eventually stormed the stage. What separated New Pants from all the wannabe punk rockers skulking around the hair salons of the mainland was that the band was tight, seasoned, harmonious and electrifying.

GoKunming caught up with les nouveaux pantalons before their Thursday gig to get the scoop on their new sound, their current tour and their love of Kung Fu movies. 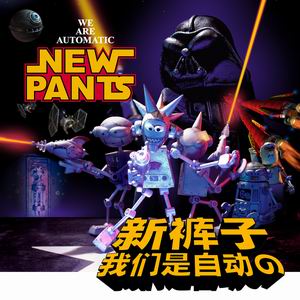 GoKunming: Is this your band's first time to Kunming?
All: Yeah, first time.

GK: How long are you on tour?
Lobo: One month.

GK: Where have you been?
Lobo: A whole lot of places. Shanghai, Nanjing, Guangzhou, Shenzhen, Guilin, Nanning, Xiamen.

GK: All in one month?
Lobo: Yeah, we're moving everyday.

GK: And where are you still planning to go?
Peng: Chengdu, Xian and then back to Beijing.

GK: How would you say the tour is going? Is it like the last?
Peng: In the past a lot of people didn't listen to rock music in China. This time a lot of people are coming out, it makes us happy to see. Before we never saw this many people.

GK: In your newest album, there's a very big shift in style. Is there any specific reason for this or would you say it was more of a natural evolution?
Lobo: Natural
Kuan: Our band, in the past, was punk and now we're playing more disco and New Wave.

GK: Right, before it sounded much like the Ramones.
All: Yeah.
Kuan: We still especially like the New York bands from the 70s and 80s. Whether it's punk or New Wave, they both are apart of that New York feeling.
Lobo: Also, The Cars.

GK: When did you start liking disco music?
Peng: Since we were kids. We listened to Michael Jackson, things like that.
Kuan: And then later there was a German band called Modern Talking. All of their things I liked.

GK: Since the change in style, would you say your audience has changed too?
Kuan: I think in audiences in China don't care so much whether the music is punk or disco or New Wave. Just as long as you give them an impression, that's enough.
Peng: To make them pleased is enough.

GK: Generally speaking, what kind of people listen to your music?
Peng: Still young people and students.
Kuan: Students and also people who are more apart of the fashionable culture or rock culture, these kind of people.

GK: What bands are you listening to these days?
Peng: Still about the same as before (laughs) The Ramones. Also New Order. Mostly older music. I listen to much less newer stuff.

GK: What about the music situation in China?
Lobo: Good.
Peng: Getting better. Before in China, bands from the coast only played a particular style and separated it from other styles. Everything was very unitary. For example, people only listened to punk music and everything else was boring. But now, new bands like all kinds of music.

GK: In Beijing, what's the music scene like? Are there any other bands in Beijing playing this kind of disco?
Peng: No, I haven't heard any disco. Take electronic music for example, there's more and more of it underground. There's also a lot of underground rock music. A lot of bands don't want to make this kind of music.
Kuan: Disco and electronic music aren't really alike. I think our music is a little more relaxed, not as heavy as some electronic music. In Beijing, people's lives are generally getting better, so they have a bit more time to go out and relax.

GK: Could you describe making your music videos from Dragon Tiger Panacea a bit?
Peng: We all really like old Bruce Lee-like Kung Fu movies. We liked the old-looking style of B-movies, the quality is a pretty poor. So we wanted to make a video that way, like Hong Kong movies from the 70s.
Kuan: Also, the video has another meaning, a little ironic. Before, these kind of old Kung Fu movies are how foreigners saw China.
Peng: People like Bruce Lee and later Jackie Chan. Plus, how often do you see funny music videos? Not often.
Kuan: Right. Most videos that you see now made in Asia all look like the ones made in the U.S. or Europe.
Peng: Generally speaking, lots of people in China especially like being grouped with westerners. You're an American, I'm sure a lot of Chinese like you. I think it should be equal, but a lot of Chinese think foreigners are just better (laughs).
Kuan: Perhaps at present, in regards Chinese culture, a lot of Chinese have a sense of inferiority.

GK: You are all artists: movie makers and stop-go animation artists. Are any of you preparing for any other projects?
Peng: I'm doing a documentary and also shooting a music video about two lesbians. It should be really interesting.

GK: Recently, I read an article that MTV and Baidu signed a business contract. Your music label, Modern Sky, will be affected by this. Obviously, the bigger your audience the better, but what are your thoughts on MTV?
Peng: MTV in China is still pretty unrefined. We went to an MTV function and did a song. It was a pretty strange experience. The other bands there, they were pretty hard to listen to. But it was still a pretty interesting impression.

GK: One last question: what's your favorite animal?
Peng: Cat
Kuan: Mine is dog.
Lobo: I rather like tigers.
Peng: You're also a cat.

New Pants are awesome!!! I just heard them on myspace, been reading about em on the net, and I love it! So New Pants, I'll be in Beijing in July so if your up for a round of Street Fighter 2, your on!

Label is seeking Bands for compilation!

We are an European label which want to spread your Music.
Want to get maximum exposure for a small investment?
We at Trias Object Records came up with the idea of putting out a series of CD compilations that would help spread the word for bands of different genres of extreme music and get them exposure on a global scalethrough band-to-band networking, radio, magazines, agencies, tours and several other outlets!!!