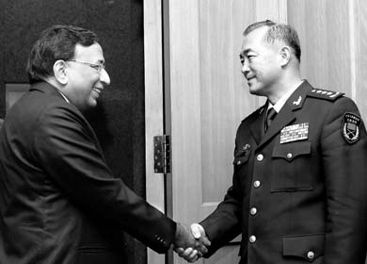 At top-level defense talks in Beijing on Tuesday, China and India announced the resumption of their "Hand in Hand" military training exercises in 2011, the first positive news in China-India relations in several months.

The 2009 Hand in Hand exercises, which were to be held in China at the end of the year, were canceled in September, after which it was announced that there would be no joint exercises in 2010 either.

The first Hand in Hand exercises were held over several days in the mountains surrounding Kunming in 2007 and consisted primarily of anti-terror drills. In 2008 the exercises took place in Belgaum, India.

For observers concerned about the recent deterioration of China-India ties, the announcement that Hand in Hand exercises will resume next year in China offers hope that the wary neighbors can improve diplomatic relations. The announcement was made at this year's Annual Defense Dialogue (ADD), which was held on January 7 and 8 in Beijing.

In addition to restarting military training exercises, the two countries also announced that they will begin establishing an information sharing platform for counter-terrorism and anti-piracy missions in the Gulf of Aden, according to Indian media reports.

September's suspension of Hand in Hand followed India's announcement that it would not rebuild its section of the Stilwell Road linking Kunming with Ledo in northeast India's Assam State via northern Burma. The shelving of the Stilwell Road's revival came amid growing tensions over the two neighbors' border, many portions of which have still not been demarcated.

Before 2009's worsening of relations, China and India had been increasing tourism and education exchanges, after having launched direct flights between Kunming and Kolkata.