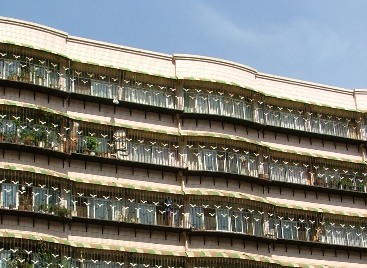 Despite its reputation elsewhere in China as one of the most beautiful cities in the country, Kunming has no shortage of eyesores, one of the main examples being the metal anti-burglar cages (防盗笼) on the outside of apartment windows.

If the city government has its way, most of these cages will be gone by the end of 2010.

Kunming media has been abuzz in recent days with the decision by municipal authorities to get rid of the ubiquitous and unsightly cages that protect the windows of residences throughout the city.

In an apparent attempt to improve the city's appearance, cages or bars protruding from windows on buildings should be removed by the end of next year, according to officials from relevant departments interviewed by Dushi Shibao.

Government sources said windows with inlaid bars or bars flush against their windows are not in violation of the new rule. No information has been given regarding the penalties for noncompliance.

As for compensation for the cost of cage/bar removal, a Xinhua report says that each of Kunming's district governments will decide how much to compensate occupants required to take action.

According to Xinhua, Kunming's anti-cage initiative is modeled after a similar rule in the city of Hangzhou.

The local government has decided to apply the new anti-cage rule to itself first, with Xishan district government offices being held up as an example after commencing the removal of all cages and bars protruding from windows. Afterward the campaign is expected to be gradually extended to the rest of the city.

Sounds like a good year to be a burglar...

Great idea! now we will be able to see the city's dirty laundry hanging from every window. Probably can get myself some decent free threads on windy days

This is the best idea that Kunming authorities have ever come up with.