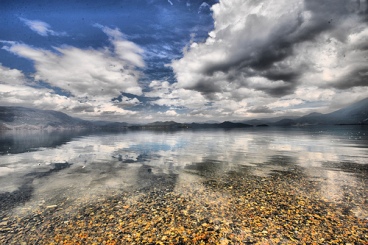 Construction work has begun on a new airport near Lugu Lake, according to a Xinhua report citing local officials.

The 837 million yuan (US$122.6 million) airport will be located 35 kilometers from Lugu Lake (泸沽湖), which is located in the northeast of Lijiang prefecture, approximately 200 kilometers (124 miles) from the city of Lijiang. It is generally reached by bus or car from Lijiang, but mudslides and flooding often block roads.

The 60 square kilometer lake straddles the border between Yunnan and Sichuan provinces at an altitude of 2,685 meters and features eight islands and several beaches and bays.

Lugu Lake is popular with domestic tourists for its mountain and lake scenery as well as for the local Mosuo (摩梭) people – population 40,000 – who are designated as a subgroup of the Naxi (纳西族) people and are best known for their matriarchal society, a label which is not fully accurate.

Mosuo women make business decisions and property is passed down along the female line, but men hold political power in Mosuo society, which prevents the Mosuo from being a pure matriarchal society.

The Mosuo are also known for their 'walking marriages' (走婚), in which women choose male partners to visit their bedroom after dark. The man typically returns to his own home early the next morning.

Once completed, Lijiang Lugu Lake Airport is expected to offer flight services to Kunming and Guangzhou. The airport is projected to handle between 1.5 million and two million passengers annually.