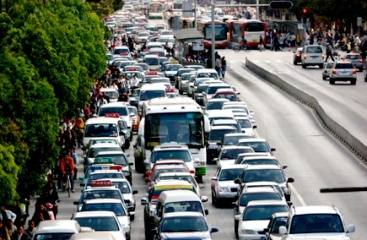 Kunming's status as one of the cities with the highest vehicle ownership rates in the country is in no imminent danger – the city now has 1.1 million registered motorized vehicles, with 900 vehicles being registered daily, according to a Dushi Shibao report.

Kunming car sales have rebounded from a several-month slowdown caused by the global financial crisis. Statistics provided by the Kunming Public Security Bureau's Vehicle Management Department show that car sales are approaching the all-time high experienced in late 2005 and early 2006, when nearly 1,000 vehicles were being registered daily.

Despite being relatively small in comparison to other Chinese cities – it is China's 23rd-largest city – Kunming became the ninth Chinese city to have one million registered vehicles last year.

Conditions are ripe for auto sales in Kunming to continue to increase in the coming months. The recent completion of the city's double-decker second ring road, the local economy's recovery from the effects of the global economic downturn and a growing second-hand car market have made the idea of purchasing a vehicle more feasible to the average Kunming resident.

Ramifications of the growing number of vehicles on Kunming's streets are apparent. In addition to increased air pollution, the Chinese saying "many monks, not much porridge" (僧多粥少) aptly sums up the parking situation throughout the city. Many of the city's parking lots are filled during the day, leading to many Kunming drivers parking illegally, often in bike lanes or on sidewalks.

To address this problem, the city government has recently announced that automobiles parked on sidewalks that block the yellow ground tiles intended for blind people will receive 50 yuan parking tickets on the spot. Whether the city has the ability – and will – to enforce this new regulation should be apparent soon, just as it was with last year's ill-fated attempt to ban the unnecessary use of car horns.

I'm sure something will finally be done about the poor air quality (in cities around the world) when drivers can no longer see the car ahead of them, because that is a safety issue. A real, palpable threat...Someone please assure me that humans are not this stupid.

Maybe if we stopped calling Chinese people stupid and started being positive, that might make some headway on the problem.

Norman, I'm interested to know where exactly Tim called Chinese people "stupid"
It seems pretty clear to me that he is referring to humanity in general.
Also, I would be interested to hear more about your theory of positive feelings and its relationship to reduction in air pollution.
I think it's pretty clear that some people around here are indeed as stupid as he fears....

I honestly don't get why it seems to be so important for people to have a car. I assume there is some face and a little showoff-iness in it around here, but then again isn't there everywhere? Whenever my gf hints of the idea of buying a car I always say that if she can find more good reasons to do it than I can NOT to I'll go ahead and buy one. It's not even close.

-Expensive, polluting, dangerous, crashes (not the dangerous kind but the fender bender kind you see all the time), gasoline prices, theft risk, parking lot price, parking fees, lack of parking space, carvalue plummet, not to mention the traffic jams happening everywhere. Oh,, not to forget that you can take a taxi to and from work the 15-20 times a month you need to and it will still be much cheaper than buying a car and paying what is needed to keep it running.

why have a car?

Obviously simple as the 100's of millions of people in the world have discovered;

If you call that convenience then I would be interested to know what you would consider to be an inconvenience...

In an urban area with good public transportation it doesn't seem very sensible to have a car.