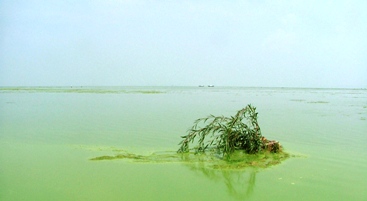 New environmental legislation by the Kunming municipal government will create approximately 430 square kilometers of protected areas which will be known as the Dianchi Plateau Wetlands Protected Areas, according to a Sina.com report. An official timetable for the creation of the protected areas has yet to be made public.

According to a statement released by the Kunming Municipal People's Standing Committee, the city's goal is to develop into a sustainable metropolis with a healthy Dianchi. Since Dianchi's water quality nosedived in the 1980s, the Kunming and Yunnan governments have spent billions of dollars on cleaning up Dianchi, with negligible results.

Resolutions passed recently by the committee have created four types of protected zones, according to government English-language news site en.kunming.cn:

1) Core areas of four drinking water reservoirs covering approximately 13 square kilometers. The reservoirs are now first-level protected areas – no individual or organization is permitted to enter these premises except for scientific research purposes.

2) Seasonal core areas, covering nearly 300 square kilometers, which will be protected at the same level as the core areas during certain periods such as fishing bans.

3) Buffer areas of forested land surrounding the drinking water reservoirs, totaling approximately 17 square kilometers. No infrastructure projects or activities that harm the environment will be permitted in the buffer areas.

4) Experimental areas composed of just over 100 square kilometers of land with a damaged forest ecosystem. These lands are located near the reservoirs, along the 36 rivers that flow in or out of Dianchi, along the lake's shores and also Xishan, the mountain situated on Dianchi's west side. Ecotourism activities will be permitted in the experimental areas, provided that they do not harm the environment or scenery.

While far from fixing Dianchi's severe eutrophication problems which have turned much of the lake a soupy lime green, the creation of the Dianchi Plateau Wetlands Protected Areas is one of the more decisive measures that have been taken by the Kunming municipal government to address some of the root causes of the lake's pollution.

In 2007 the current government under Kunming Party Secretary Qiu He (仇和) and Mayor Zhang Zulin (张祖林) inherited the seemingly unfixable Dianchi problem. But unlike under previous governments, there is some visible progress being made, the biggest example being the improvement in water quality of the Panlong River, the largest of the rivers draining into Dianchi.

In March of this year, the city government allocated one billion yuan for lake cleanup and also assigned one official to each of the 35 rivers flowing into Dianchi.

In addition to environmental measures, a Dianchi Lake bike path which will circle the lake is currently under construction, and is expected to be completed next year.

Holy jeezum this is awesome! That foul smelling green lake needs some serious clean up and a local government that wants to improve it. Let's hope that this is it.

All those billions of dollars are just buying all those POS Porsche Cayennes. Nothing will ever happen with that lake until Beijing puts some oversight on the local peasants turned leaders in Kunming. I've heard too many stories of people taking all that money and then putting on a grand spectacle to show the Beijing leaders when they come down. Can't wait to hear about the new huge houses and vacations purchased with this money. To be rich is glorious.

indeed the lake wouldn't be such a disaster had the local officials done something about it nearly a decade ago. the lake is so horribly polluted you'd have to imagine it would take years, if not decades to recuperate. too little, too late.

'Nope' has a point. But I hope that the recent crackdown on corruption will deter too many new villas being built (There will be some, of course).

If not, perhaps, the arrival of the next revolution will arrive before we originally imagined.