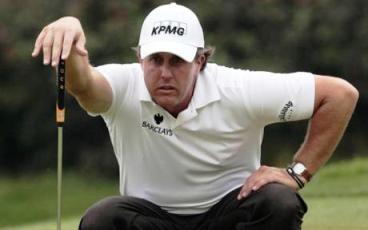 American golfer Phil Mickelson announced this weekend that he will build a par-3 course for children with a golf academy in Kunming to promote the sport at the grassroots level, according to an AFP report.

Speaking on the sidelines of the WGC-HSBC Champions tournament in Shanghai this weekend, Mickelson, the current number two golfer in the world, said that his goal was to build a base for golf in China among the country's youth.

The sport of golf, which is suffering elsewhere in the world due to the global economic downturn and other factors, has high hopes for China, one of the few places in the world where courses are still being built.

The course and academy in Kunming and the upcoming The World Course in Tianjin, which is inspired by great holes from around the world, will be Mickelson's first golf projects outside of the United States.

"This is a tremendous opportunity to help develop the game in the largest emerging market in the world," he told reporters in Shanghai.

For Kunming, Mickelson's announcement strengthens the city's status as China's golf city. In last year's rankings of China's best golf courses by Golf Digest magazine, three of the top six courses in the country were located in Kunming. Both of the top two courses were located at Spring City Golf & Lake Resort, whose lake course edged out its mountain course for top honors.

Getting more than just children from wealthy families in Kunming to embrace golf will be a challenge, as no public courses exist and green fees at clubs such as Spring City and Lakeview Golf are more than US$100 for one round of golf.

Former Spring City general manager Arthur Yeo recently told ESPN that golf still has a long way to go before it achieves widespread acceptance from Chinese society – and the government.

"It is still an elitist sport, and for over 25 years it has been discouraged," said Yeo. "Right now, the government doesn't know how to respond because they still have to worry about the general public. Their power base is the general public."

Interesting. I didn't know that Kunming was the capital of the world. I would love to be a part of this program, with setting up an online learning feature to the program to helping bridge the limited resource gap between the China and US facility, etc.