By Matthew Sills in Features on September 7, 2009 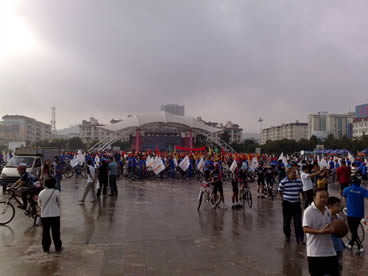 Saturday morning in Yuxi, Nie'er Cultural Square rocked out to the sound of Kunming's Tribal Moons as around 300 cyclists prepared to take part in China Vätternrundan 2009. Locals out for morning exercise showed some surprise at the gathering of lycra-clad, carbon fibre-toting enthusiasts.

The full race route of 175.5km went from Yuxi across to Jiangchuan, and then around Fuxian Lake, via Jiangcheng, Lüchong, Chengjiang and Haikou Zhen, before returning the finish in Yuxi. The route offered great views of both lake and countryside, and many locals came out and jia you'd their support. A shorter course of 78.8km finished in Chengjiang, at the north end of Fuxian Lake.

Darren Benson of Australia took first place in the men's long course, with a winning time of 4hr 40:44min, a mere 1/10th of a second ahead of David Tonks of the UK, who had to settle for second place. Liu Min of Guangzhou was 4/10ths of a second further back for third place.

The women's long course race was settled far in advance of the finishing line, with no need for sprinting heroics. Shi Yanmei took first in 5hr 7:54min, with Chen Lijuan next in 5hr 40:39min. Third place finisher He Hua came across the line just over an hour later, at 6hr 41min. More information about men's and women's race results can be found on the race's official results page. 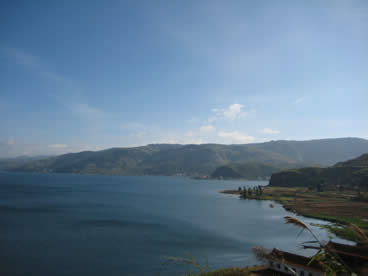 Course conditions were hot, with strong sunshine and a stiff breeze that blew from the south for most of the race. This took its toll on the participants as nearly 50 riders failed to complete their chosen courses. Organisation was handled well, with dangerous parts of the course flagged clearly, and the Yuxi police excelled at maintaining order on the course and offering help to riders in difficulty.

Vätternrundan started in Sweden as a recreational ride around Lake Vättern in 1965 and has since become the largest recreational bicycle race in the world. It is brought to China by sporting event company Nordic Ways, who held the event in 2007 and 2008 at Changbai Mountain in Jilin Province. We hope they return to Yuxi and Fuxian Lake in 2010.