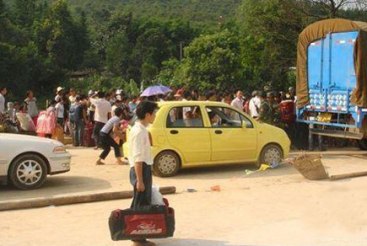 An attempt by Myanmar's ruling military junta to bring rebel ethnic fighters under its control has led to escalating tensions, reports of fighting and a looming specter of war, with thousands of refugees fleeing into southwestern Yunnan, according to a Reuters report.

China- and Thailand-based media outlets have reported that on August 8 the Myanmar army sent hundreds of troops to the region of Kokang in the country's northeastern Shan State. Kokong, which has held to a 20-year ceasefire with the Myanmar government in Yangon, is home to many ethnic Chinese as well as other ethnic groups.

According to statements released by a recently formed alliance of four area ethnic groups known as the Myanmar Peace and Democracy Front (MPDF), soldiers in Kokang are under pressure from Yangon to become part of a border security unit under the army's control in the runup to next year's national election, the first in 20 years.

Army troops have reportedly attacked a factory used by ethnic rebel soldiers to maintain and repair weapons, claiming that it was a production facility for illegal drugs. An armed standoff between army and ethnic fighters allegedly followed, sparking a flow of refugees out of Kokang into the western region of southwestern Yunnan's Lincang prefecture.

"Tensions are extremely high, with anticipation of resurgence of war, tens of thousands of ethnic people have fled," the MPDF statement said.

Next year's election in Myanmar will be the first since the 1990 election in which Aung San Suu Kyi's National League for Democracy won a clear victory, which was ruled null by the junta government. Would-be prime minister Suu Kyi was placed under house arrest shortly afterward and has spent most of the last two decades in the junta's custody.