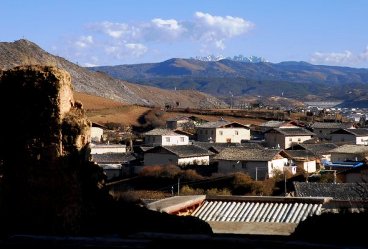 With the travel season upon us, now is a good time to look to getaway destinations around Yunnan. Today and tomorrow, writer and photographer Megan Melissa True will share her experiences in northwest Yunnan's Shangri-la.

Shangri-la, previously known as Zhongdian, is located high up in the mountains near the Yunnan-Tibet border. The city claims to be the inspiration for the setting of James Hilton's book, "Lost Horizon." Regardless, it is an enchanting land filled with Tibetan villages and monasteries embedded in its mountains.

Shangri-la has been described as an earthly paradise because of the land's majestic beauty. It's also rumored that people there live well beyond the normal life span and age much slower. Several friends and I headed there to find out the secrets of this age-defying paradise.

After a twelve-hour night bus from Kunming we dropped our belongings off at Kevin's Trekker Inn and set out to roam and explore Tibetan villages on the outskirts of town. From the road, one village looked like it would be an easy 45 minute walk but we soon realized it was much farther.

We headed down the path and decided to cut through the field between the villages and the road. The road wound all the way around the bottom edge of the mountain and would easily add an hour to our hike.

We began tromping through the field but discovered it was pretty wet and marsh-like. Then, one of my friends noticed the field was getting wetter and deeper. She then pointed to a cow out in the middle of the field that was neck deep in water. Just as she said this, my next step dropped me a foot into the ground.

The water and marshy grasses were almost up to my knees. So, with squishy wet sneakers we headed back to the dirt road. Later we read in our guidebook that in the summer the field is actually a lake. An hour and half later we finally reached the first village.

We had heard that Tibetans may invite you into their homes for yak butter tea and baba, a traditional flat bread. We wandered around but only came across a few Tibetans, who were busy chopping wood or hanging up the year's harvest. 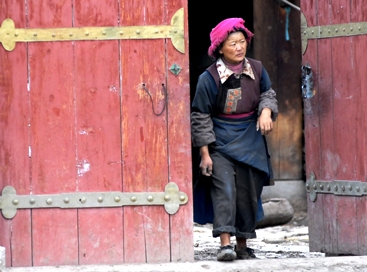 We eventually found a woman that was selling snacks to some village kids. We asked her if she knew where we could get yak butter tea. She happily invited us into her home to sample her family's recipe.

The Tibetan homes in Shangri-la are two stories of thick timber that are hand-chopped and constructed by each family. This woman's home was no exception. We climbed the thick-wooden staircase to the second floor.

As we walked into the large open room, our eyes had to adjust to the darkness. Once they did, we were amazed by the beautiful intricate hand-carved patterns in the wooden doors, walls and cabinets. In one corner of the room there was a wood-burning stove where the woman began warming up our yak butter tea. As it heated, the woman scurried into the kitchen to make baba.

After several minutes the tea kettle whistled and our hostess scampered back in to fill our bowls with simmering yak butter tea. She told us we could add several spoonfuls of sugar if we wanted because of the strong flavor. After the first sip of the thick buttery broth, I was ready to dump a bowl of sugar into my tea. It was like drinking thick liquid butter.

Unfortunately for me, being the good hostess that she was, she made sure our cups never went below the rim. Next she brought out steaming Baba. Tibetans like to dip it into their tea or eat it with sugar. When it's dipped in sugar it tastes just like a warm sugary donut. Delicious.

After snacking and sipping our tea, we were shown how to make a dish that eaten every morning by many Tibetans. She poured a little yak butter tea into her bowl and began mixing in a grain powder called tsampa plus some sugar. She skillfully molded it with her hands until it reached a doughy texture.

Once finished, she offered us all a piece and it was surprisingly good. It had a peanut buttery taste. She encouraged us to try to make our own. Who can refuse the chance to play with their food? So, we all tried and failed to recreate the same texture and taste that she had just made. After chatting and snacking for over an hour, we thanked the woman and gave her some money for her kindness. It's common to give 8-10 yuan per person.

We thanked her, waved goodbye and headed down the road back to town. After about 45 minutes of walking we realized we still had much further to go and it was getting dark. We flagged down a truck that was on its way to town. We hopped in the back and enjoyed the sunset and our bumpy free ride home.