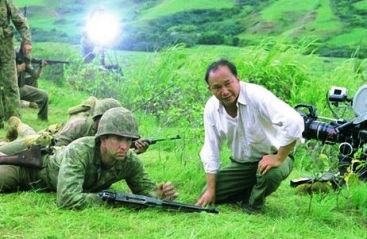 Hong Kong action director John Woo (吴宇森) has signed on to direct a China-Hollywood joint production about the Flying Tigers, according to a Dushi Shibao report.

The movie, which will begin filming this year, is expected to cost US$100 million, which will make it the most expensive Chinese film made to date, the report said.

A signing ceremony for the film, called "Flying Tiger Heroes" (飞虎群英) in Chinese, was held in Beijing on July 3, with Lion Rock Productions, Fengde Dadi Culture and Media Co Ltd and the Propaganda Bureau of the Standing Committee of the Yunnan provincial government all inking a cooperation agreement for the film.

Woo, director of popular action movies in Hong Kong such as "Hard Boiled" and Hollywood films including "Mission: Impossible 2", said the movie will feature the most spectacular aerial battle scenes ever seen in Chinese cinema. He added that the movie would highlight the spirit of Yunnan culture as well as Chinese heroes from World War II and the US-China friendship that led to the founding of the Flying Tigers.

Woo will have his hands full presenting an accurate account of the Flying Tigers, whose history is often misrepresented or misunderstood in both China and the US. Officially known as the American Volunteer Group, the Yunnan-based Flying Tigers flew missions against Japanese bombers and fighters from December 1941 to July 1942 in southern China and Myanmar, then known as Burma.

"This is an extremely important production," Woo said at the signing ceremony. "Currently, basic preparations for shooting work have already been made and in a month we'll confirm the script. This Yunnan-themed film emphasizes China-US friendship and the contributions of the Flying Tigers and the people of Yunnan during the War of Resistance."

this is exceptionally great news; i have
been building a "flying tiger" collection of original signed materials, photos and
lithographs of the original "Flying Tigers" for years, anyone out there a buyer ? list on request, over 80 superb items, for sale as a collection only.

"jerbo", I am a grandson of Claire Chennault and would be interested in seeing a list of the items you have for sale. If you read this, you may email the list to me at: foundjamesusa@yahoo.com

The story, the real story, of the Flying Tigers far exceeds anything any fiction writer could dream up. The suffering of the Chinese people was enormous and the history here demands respect. The potential for a great film is most significant and I wish Mr. Woo every success in this important film. Great care needs to be taken with the casting as any mistakes here can ruin the film.

I hope you will have some footage of China National Aviation Corporation (CNAC) and the role they played with the Flying Tigers. CNAC was a partnership of the Chinese government and Pan Am and pioneered the Hump routes over the Himalayas, even before WWII. They were the main source of supply for the AVG and continued to fly the Hump throughout the war and afterward.

A group of CNAC Association members will be in Kunming in September (2010), including Moon Chin one of the surviving pilots of that era.

My grandfather Edgar Gibson was an ordinance officer for the 23rd fighter group stationed in Kunming, he rarely spoke of the war but when he did I would listen rapt with attention. I hope this movie does reality and these men justice...Pear Harbor the movie was an atrocity to history, so was Windtalkers, the Iwo movies were not bad but if you want to portray WW2 accuratley take a hint from the HBO Pacific and the Band of brothers, there is no reason to fictionalize, anything about these men or the brutality of the war in China. You owe it to the dead (both chinese and american) and the living to accurately portray history.

These are some of the best comments about the times and the peoples of both nations. As historian for the FTHO, I have learned a tremendous amount of history; some well-known; some almost unknown. It is our mission to see that honors are bestowed on both sides. Without the Chinese support there could have been no AVG and without those first air warriors China might not have survived as well. Both nations owe each other incalculable human sacrifice and respect for an accomplished joint effort - let's hope this film does justice to the real story.
Rumor has it that some scenes are borrowed from 4-years before the Tigers arrived, and some stars play a part that took place after the Tigers disbandment - July 4, 1942. Whether true or not, there is a need to establish Chennault's presence in China from 1937 to mid 1945. Required also is the affections and sacrifices of the peoples of Yunnan; the 10's of thousands who built the airfields by hand; the training in Burma and the air battles in the skies above, not forgetting the Chinese who staffed every position from guards to mechanics; from those manning the early-warning net to the nurses and doctors, radio-operators and guerrillas behind enemy lines, and even the tradesmen who did their best to fashion as much Western into the Americans' hostels, offices & recreation areas. There was something akin to LOVE shown by both sides. The Tigers have never forgot the friendships made and visit as often as age allows. It's time now for their sons & daughters and grandchildren to meet the same generations of Chinese and rekindle that love and friendship. We trust "Flying Tiger Heros" will help!

Is there any update on the progress of this great movie project, as the original post was 2 years ago?

Are there any museums in Kunming which currently feature/display Flying Tiger memorabilia?

The project to build a memorial park at Guilin, China honoring, remembering and recording for history the amazing story of the Chinese and "Flying Tigers" durring WW II is progressing. General Chennault was a tactical genius who either invented or used to the fullest several inovative ideas in his struggle against the Japanese. Among these were the "Blood Chit" and the "Early Warnimng Net". The blood chit told the local Chinese villager that the person who had it was a friend and should be given all possible aide. Because of this 95% of the American Airmen who were shoty down over enemy territory made it back to base to fight another day, many times at great sacrafice to the Chinese who rescued them.

The opperations and command cave located at the old Yang Tang airfield in Guilin, China is where all the early warning information was funneled and then used by General Chennault to maximize the effectiveness of his limited resources. It will be the focal point of the Flying Tiger Heritage Park. I would hope that director Woo includes the cave in his production and maybe could even see his way clear to provide some of the funds we have commited to raising for the cave restoration. More about this project is available at www.FlyingTigerHistoricalOrganization.com.

Wonderfull news about the Flying Tiger film. I am the step- son of a P40 pilot who transfered in from the RAF Eagle squadron in England after the battle of Britten but this was after the US AAF took over as the 14th AAF. My mother was a good friend of Col. Ed Rector, a member of the first AVG. The Grandson of John. C."Pappy" Herbst also has a web sight. Col Herbst died in the crash of his P-80 shooting star jet at Del Mar, CA air show, 1946.

is there something that can explain the overlap between Flying Tiger fandom and borderline illiteracy?

Zhijiang county of Hunan Province claims that it has the only memorial in China with thematic exhibition about the flying tigers.