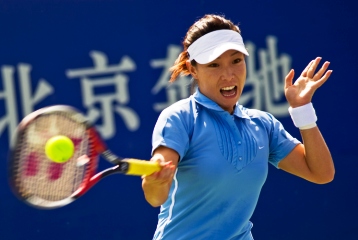 The words 'tennis powerhouse' are not generally associated with China, but the PRC has made great progress in recent years in terms of establishing itself as a rising star in the tennis world – witness Li Na coming in second at this month's Monterrey Open and Zheng Jie (pictured above) making it to the semifinals at Wimbledon last year.

In an effort to spur greater interest in tennis at the grassroots level, China's sports authorities announced the creation of a new national amateur tennis league – the China Open Rating Tour (CRT) – which will launch next month. As China Daily explains:

The CRT will be divided into three levels of proficiency to sharpen its competitive edge, similar to a boxing competition with different weight classes. It will feature singles, doubles and mixed doubles play. Winners of each competition level will battle for the national trophy during the newly promoted China Open tournament that runs from Oct 1-11.

The tournament will be divided into six regions, with seven cities hosting competition. The regions and cities include: North (Beijing), Northeast (Shenyang), Central (Wuhan), East (Shanghai), South (Guangzhou) and West (Kunming and Chengdu).

Amateurs and retired professionals of any age – or nationality – are invited to apply to compete in the CRT via the league's official website.

June 18, 2021 "We are looking for the full-time computer English teachers with the education background of Computer Science teaching at top unive …"

June 18, 2021 "I own a three-bedroom apartment with two west-style bathrooms, a west-style kitchen and a West-Hill-View balcony. It is nearby Dian Chi and West Hills …"
Jobs Offered estellazhai

June 18, 2021 "Hey, you guys, I am Lily, in the past,I was a teacher with teaching experience of over 10 years,now I want to learn some Japanese and improve my Engl …"
Living in Kunming JanJal