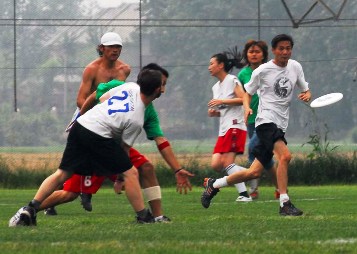 For the last several months, a small but dedicated group of individuals has been meeting on Sunday and Wednesday afternoon on the football pitch behind Yunnan Minorities University to play ultimate Frisbee, a relatively unknown sport in this part of China.

On February 7 and 8, Kunming will host its first ultimate Frisbee tournament featuring men and women from Kunming, elsewhere in China and around the world in a 'hat tournament' in which individuals enter rather than teams.

Greetings from Kunming Ultimate! We are a group of foreigners and locals that play Ultimate Frisbee twice a week at the Minzu Daxue soccer field. What is Ultimate, you ask? Check out this link for info.

Here's the short version: it's a seven on seven team sport played on a 120m x 40m field with 25m endzones included in that length. You can't run with the disc and you advance down the field by completing passes to your teammates. If you catch it in the other endzone, you score. Most games are played to 13 or so but also have a time limit.

The reason we're bringing this all up is that we're having an Ultimate tournament right here in Kunming in just a couple of weeks! On the weekend of February 7-8, people from all over China, including Beijing, Shanghai, Ningbo, Chengdu, Shenzhen, and Hong Kong, will be traveling to Kunming to participate, but all ability levels are welcome. Don't have a team? Don't worry, this is a hat tournament, so you'll rank yourself in several categories and be placed on a team based on your ranks. All the teams will be about even so it'll be good competition the whole way through!

The tournament fee is around 250 kuai, but before you stop reading, look at what that includes: tourney food (fruit, bread, peanut butter, etc) at the fields both days, dinner on Saturday night, two free drinks at both parties (that's right, there are tournament parties on Friday AND Saturday night), free beer and liquor at the fields, and a tournament t-shirt! Let us stress that this is an entire weekend-long experience with lots of good times for all.

If you're still not willing to shell out money to play a sport you've never played, come play! We'll be having a free Ultimate clinic on Sunday, February 1st at 3pm at the Minzu soccer field. Come see what we're all about before you make a decision.

If you're looking for a way to get some exercise, meet and party with some cool people, and learn a new sport, then this is the thing for you!

Check out the tournament on facebook here or send an email to kunminghat at gmail.com for more information.

Yeah,Welcome to play with us!