Work to begin on Lugu Lake airport in 2009 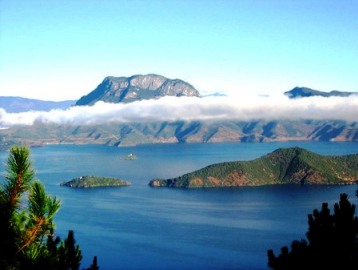 One of the biggest tourism destinations in Yunnan without an airport has just jumped into the queue. The Yunnan Civil Aviation Bureau announced that construction will begin next year on Lijiang Lugu Lake Airport, according to a Kunming Daily report.

Lugu Lake (泸沽湖) is located in the northeast of Lijiang prefecture, approximately 200 kilometers (124 miles) from the city of Lijiang. It is generally reached from the Yunnan side by bus or car from Lijiang, with mudslides and flooding often making roads impassable.

The lake straddles the border between Yunnan and Sichuan provinces at an altitude of 2,685 meters and features eight islands and several beaches and bays. It is popular with domestic tourists for its mountain and lake views as well as for the local Mosuo (摩梭) people, who are officially listed as a subgroup of the Naxi (纳西族) people and are best known as a matriarchal society, a label which can be misleading at times.

Mosuo women are the heads of households – they make business decisions and property is passed down along the female line – but Mosuo men hold political power in society, which prevents the Mosuo from being a true matriarchal society.

The Mosuo are also known for their 'walking marriages' (走婚), in which women choose male partners to visit their bedroom after dark. The man typically returns to his own home early the next morning.

Although the majority of walking marriages tend to be long-term, Mosuo women have been misleadingly portrayed as sexually promiscuous to domestic tourists, many of whom visit Lugu Lake looking for more than clean air and mountain vistas.

Lijiang Lugu Lake Airport will receive an initial investment of 900 million yuan (US$132 million) and will offer flight services to Kunming and Guangzhou. The airport is projected to handle between 1.5 million and two million passengers annually. The airport's construction will reportedly coincide with a local government plan to build the area into a 'tourist town of matriarchal society'.

Having dated a Mosuo girl for a while I think the airport will bring more good than bad for the people of the region. There is no denying that the majority of the people there are now dependant on the tourist dollar for survival, so a few extra plane loads of cash from the richer coastal areas and the rest of the world to this impoverished inland area can only be a good thing in my eyes.

Everybody has a trump card they rely on for survival and it is only lucky that the Mosuo have one as a society. As modernism reaches all corners of the globe, I believe that the people would have likely eventually bowed to the status quo and lost their traditions, for if anything, fear of exclusion and extinction from the modern world. At least now they are encouraged and get paid for keeping up their traditions.

What one can only hope for then is that this extra wealth gets properly distributed for improving quality of life for all in the area, promoting sustainable tourism and protecting the pristine environment.

Sure is vandalism in one way, Chinese people tend to capitalise on and destroy their own cultural heritage and has absolutely no respect for nature and the untouched... but Pushingeast has some good points though...