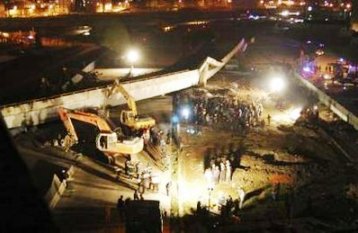 A 200-meter section of the Xiaozhuang Flyover (小庄立交桥) in northwest Kunming collapsed last night, killing two and injuring four. The flyover was undergoing demolition when at 7:30 pm the large segment of elevated road collapsed, crushing a car that had been parked underneath.

The four injured were taken to a nearby hospital for treatment, no word has been given regarding their condition. No information has been released regarding the identities of the deceased or injured.

Construction on the Xiaozhuang Flyover - which connects Erhuan Bei Lu, Erhuan Dong Lu and Kunqu Lu near the Jinxing Residential Area – was only completed in October 2006.

The interchange is one of several flyovers along Erhuan Bei Lu, Erhuan Dong Lu and Erhuan Nan Lu that are being demolished to make way for the latest government attempt to address Kunming's growing traffic problems, which are the result of booming private car ownership and inadequate infrastructure.

May 4, 2021 "Hi, a Chinese native speaker who can speak excellent English and standard mandarin with master degree in language teaching. She teaches Chinese to stu …"
Jobs Wanted jj123