The Yunnan version of the ubiquitous spring roll is generally made larger than its Cantonese cousin. It is also made using a thicker and more porous pastry which gives it a more deep-fried flavour.

oil for deep frying
30 pre made spring roll rounds -These rounds can be made at home with wheat flour, egg white and water or purchased in a local market.

Part one – Preparing the filling
Fill a wok halfway with water and bring it to a boil. Once boiling, add chives. Boil for around 30 seconds to blanche the chives and then remove. Chop the chives into 2 cm lengths. Add bean shoots to the water, boil for one minute and then remove.

Mix cornflour with about 3 tablespoons of water in a small bowl. Keep this 'glue' handy. 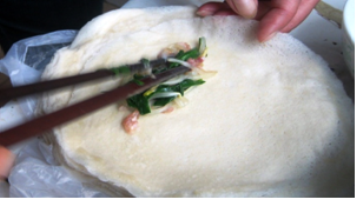 Place a small amount of the mixture onto a round and spread it lengthways approximately 1/4 of the way into the round. Roll up the round until about halfway then fold in the edges after applying a little of the cornflour 'glue' with a finger to each of them. Apply a little glue to the end of the round and roll along to complete the rolling process. Place completed spring roll on a plate and then repeat with the next round until the filling is used up. 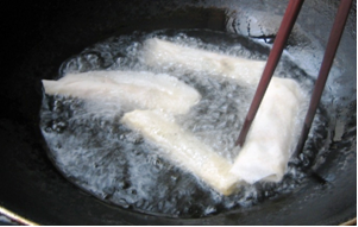 Part three - Frying
Heat a sufficient depth of oil in a wok to just under a boil and place the first spring roll in. After a short while add the second. Cook each roll until nice and brown, which will require turning them over in the wok. Ideally, you will want to have your own 'production line' of 4-6 rolls in your wok at any time with a new roll going in one end as the longest-cooked roll is taken out the other. 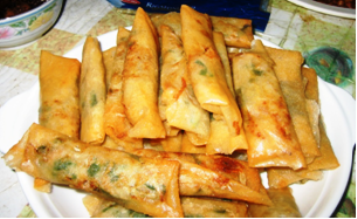 When browned each roll should be removed from the wok and placed on a plate, ready for eating. The spring rolls are ordinarily served hot without any dipping sauce alongside the other courses of a meal.

I can't seem to find spring roll rounds in the markets down here in Simao. Do you have a more specific recipe for spring roll pastry (Yunnan-style)? Most recipes I've seen for spring rolls stipulate filo pastry, but that sounds very hard work to produce...

Thank you so much for putting these recipes up here! I've moved back to the states and haven't had any real Kunming food and have missed it dearly! I'm so glad that i now have some of my favorite food's recipes!

I have a different recipe also starting with a pancake but you pre cook the filling then the pancake is cooked filled and sealed all in the pan.

Does anyone know what region this style is from?

How to make spring roll:
Sift the flour and add salt, egg and water and make a smooth batter.

To make the filling heat 2-3 tbsp oil in a wok, add ginger,garlic and mushrooms, stir fry for 10-15 seconds.
Add leeks (if available) and stir fry for about 1 minute, then add carrots, cabbage and cook tossing the vegetables until they are crisp-tender.
Add the bean sprouts, salt, pepper and soya sauce, cook stirring for 2 minutes. Set aside the filling to cool.
Heat little oil in a flat non-stick pan and add enough batter so that it covers the base of the pan.
Cook both sides of the pancake till golden. Repeat the same till whole batter is utilized.
To make the spring rolls place 2-3 tbsp. of the filling in the center of each pancake.
Fold in the sides and form a tight roll, sealing the edge with a little flour and water paste.
Deep fry in hot oil until golden.
Serve the vegetarian spring roll hot.