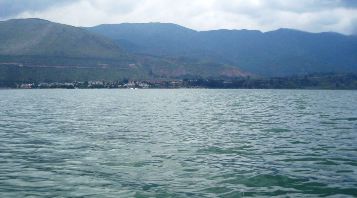 Despite being landlocked, Yunnan has plenty of water, including the headwaters of the Yangtze, Mekong and Salween Rivers. It is also home to nine large lakes, with Kunming's Dianchi Lake (滇池) the biggest of the group.

Dianchi Lake is also famous for being heavily polluted – to the point where its water is unfit for industrial use. Yunnan's polluted lake club has recently added a new member – Yangzonghai Lake (阳宗海) – which the provincial government announced has heavy levels of arsenic in its waters. Yangzonghai is now officially considered unfit for drinking, swimming in or fishing in.

The arsenic discovery came during a snap inspection of enterprises operating in the Yangzonghai basin 45 kilometers east of Kunming, with eight companies found to be engaging in illegal polluting practices. Yunnan Chengjiang Jinye Industrial and Trade Co Ltd (云南澄江锦业工贸有限公司) has been named as the main polluter.

As recently as 2002, Yangzonghai had been noted for having water clean enough for drinking and swimming – a stark contrast to the environmental devastation of nearby Dianchi Lake. In February of this year, Kunming Communist Party Secretary Qiu He (仇和) visited Yangzonghai, warning local enterprises that the lake must not become a "second Dianchi".