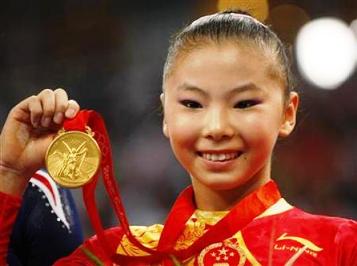 The International Olympic Committee has launched an investigation into the ages of gold medal-winning gymnasts He Kexin (何可欣) and Yang Yilin (杨伊琳), according to multiple media reports. Accusations have been leveled that the hosts cheated by faking age records in the sport, which requires that athletes be turning 16 or older in the year they enter Olympic competition.

If the IOC finds that He and Yang are underage and strips China of medals they won, that would cost China both of its women's gymnastics golds—the team title and He's uneven bars gold—and two bronzes, won by Yang in the uneven bars and the all-around competition.

The Associated Press claimed to have found archived reports (later scrubbed from the Internet) from last November in Chinese state media Xinhua, stating that He was 13 in 2007. More recently, some digging by an American computer security expert revealed more records indicating that He is underage.