Slow medal day for China, US 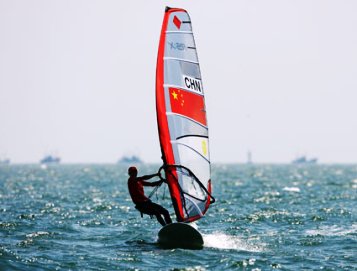 Both China and the US had slow days at the Olympics on Wednesday, with China picking up one medal – a gold in sailing – and the US taking no medals on the twelfth day of competition as of 8:15 pm Beijing time.

China continues to lead the US and the rest of the world in gold medals, with 44. The US and Great Britain trail China with 26 and 16 gold medals, respectively.

China inched closer to the US in terms of total medals, with 77, just two shy of Team USA's 79. The Russian Federation was in a distant third with 45 total medals.

The event uses a complicated scoring system that runs over 11 races, with higher points for the final 'medal race'. Yin made a bad start, having chosen a different route around the course from her main rivals. She caught up well, but her overall status was unsure until late in the race. Italy's Alessandra Sensini struggled with the light winds, but won the race to take silver. Newcomer Bryony Shaw of Great Britain finished second to win bronze.

While this may be the mainland's first windsurfing gold, a Chinese sailor has taken gold on the board before - Lee Lai Shan (李麗珊), popularly known as "San San", took Hong Kong's first-ever Olympic medal in Atlanta, becoming a local hero in the process.