Interview: Curbing the spread of HIV/AIDS in Yunnan

By Matt Schiavenza in Features on August 4, 2008 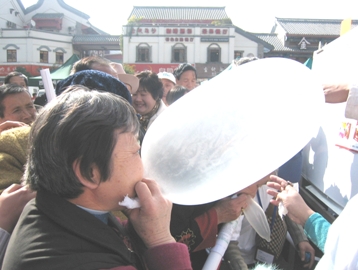 Despite marked progress in recent years, the spread of HIV/AIDS and other sexually transmitted diseases remains a major challenge for China - especially in Yunnan, which is just north of the Golden Triangle and where China's first AIDS case was discovered. In an effort to combat the disease and other problems such as malaria, the Chinese government cooperates with several international non-governmental organizations (INGOs) who work towards reducing the prevalence and spread of these illnesses.

One such Population Services International (PSI), has its Chinese headquarters in Kunming. Funded by US AID and The Global Fund to fight AIDS, Tuberculosis and Malaria, PSI uses targeted behavior change intervention, social marketing and evidence-based research in their work toward improving the health of the most vulnerable people in China.

GoKunming spoke with Clare Ye Sheng, a Shanghai-born American who works as PSI's China Communication Officer, to find out more about what PSI is doing in Yunnan and elsewhere in China:

Clare Ye Sheng: PSI primarily works to prevent the spread of HIV/AIDS and malaria in Yunnan and Guangxi. We work on HIV prevention through the promotion of healthy behavior and social marketing of condoms and lubricants geared towards high risk groups. We also provide health services and outreach within the community through our drop-in-centers for injection drug users in Kunming and for female sex workers in Mengzi, Honghe. For malaria prevention, we engage in social marketing of long-lasting insecticide treated mosquito nets as well as malaria prevention education in villages throughout Yunnan.

GK: Have PSI programs met with any resistance from its target population on a cultural basis?

CYS: Although PSI is an international NGO based in the US, we strongly believe in local engagement as one of our primary working principles. PSI/China's role is to support the government of China in combating HIV/AIDS and malaria. In addition, most of our staff are locally hired Chinese, so there are very few communication or cultural conflicts to deal with.

Obstacles that we do face derive mainly from a lack of awareness and correct knowledge of HIV/AIDS prevention and social norms regarding relationships amongst the vulnerable population that our programs aim to help. For example, many female sex workers believe that they can prevent the transmission of disease through hygiene alone, and many villagers view mosquito nets as a source of warmth in winter rather than a method of preventing mosquito-borne diseases. We work to correct these misconceptions through targeted intervention based on extensive research to understand the barriers for them to adopt healthy behavior.

GK: Does PSI hope to expand? If so, what are some future projects that the organization would like to engage in?

CSY: We would like to continue our work in Yunnan and Guangxi and expand our HIV prevention services to other at-risk populations such as migrant youth and are also working to promote our social marketing approach with local partners and organizations.

GK: What do you personally consider the most gratifying aspect of your work with PSI?

CSY: During my tenure with PSI I've had the opportunity to travel to villages in remote locations in Yunnan. Being able to talk to villagers about pertinent health issues, understand their lives, and make these personal connections has been immensely gratifying.

Hi Matt
I run a NGO in Ghana working with HIV/AIDS and I will be going to Kunming next week. I would like to get connected with Clare Ye Sheng; can you please pass my contact details over to her and give me her email?!