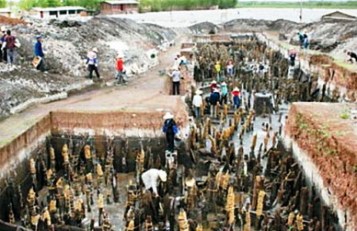 More than five decades after its initial discovery, an archeological site in Dali dating back more than 3,000 years ago is suspected of being the world's largest Neolithic dig, according to a China Daily report.

The site, located on the banks of Jian Lake in Jianchuan county, Dali prefecture, was first discovered in 1957 by workers digging a canal, but excavation at the site – which has to date yielded more than 3,000 artifacts – only began in earnest in January of this year.

In addition to pottery, iron implements and bones, the site features more than 2,000 wooden poles dug 4.5 meters into the ground.

"I was shocked when I first saw the site. I have never seen such a big and orderly one. This could be only a small fraction of the actual community that existed at the time," China Daily cited Yan Wenming, history professor at Peking University, as saying.

The Neolithic period began about 10,000 years ago in the Middle East and is considered to be the end of the Stone Age. It is marked by the emergence of rudimentary agriculture and ended with the appearance of metal tools, either bronze or iron, depending on the part of the world in question.

Yan said the site is already bigger than the Neolithic site at Hemudu in Zhejiang province, which is considered to be the cradle of the Yangtze River civilization. Other similar in China have also been found in Hubei and Guangdong provinces.

"Right now there is also such a site being excavated in Switzerland. But that site is smaller than the one in Yunnan. The Yunnan one could be the largest in the world," Yan said.

Twenty-eight excavations have been made at the Jianchuan site, covering a total of 1,360 square meters. Min Rui, a Yunnan Archaeological Institute researcher leading the excavation, said the area may eventually cover 4 square kilometers.

Was talking to Kristina the other day... she and I both agree that your site rocks!!! good job!!!