Yunnan's ethnic minorities at the end of the Qing Dynasty 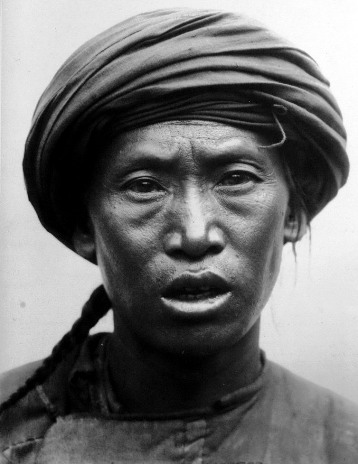 Editor's note: Every week for the remainder of 2008 GoKunming will publish photos from the collection of Auguste François (1857-1935), who served as French consul in south China between 1896 and 1904, during which he spent several years in Kunming. The photos have been provided by Kunming resident and private collector Yin Xiaojun (殷晓俊). GoKunming thanks Yin Xiaojun for providing us a glimpse of Yunnan at the beginning of the 20th Century.

In addition to the time he spent as French consul in Kunming, Auguste François also spent time traveling in southern Yunnan, where France was building a railroad from Vietnam to Kunming. In the course of his travels, he had the opportunity to photograph some of Yunnan's smaller ethnic groups for the first time.

Spending most of his time around the ruling Manchu of the Qing government and the majority Han, it seems that Yunnan's other ethnic groups piqued François' interest.

The above photo is of an ethnic Yi (彝族) man. The man is a slave and a member of the White Yi (白彝) branch of the Yi people, who were not typically enslaved, unlike their unfortunate cousins the Black Yi (黑彝), who were considered a slave race. Note the man's Manchu-style braid.

A Catholic girl in Honghe 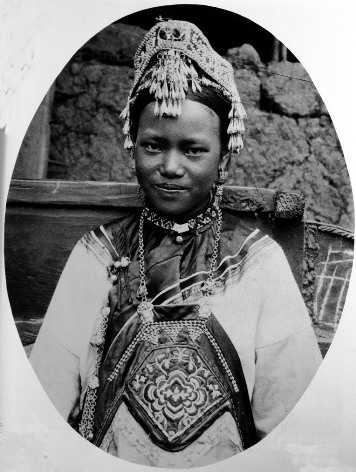 The girl in the above photo was a resident of southern Yunnan's Honghe prefecture (红河州). François noted in his journal that the girl, who is believed to be from the Hani ethnic group (哈尼族), was Catholic – a result of French missionaries venturing into Yunnan in the 1860s. The Hani, who today are concentrated primarily between the Lancang and Yuan Rivers, share ancestral roots with the Yi.

Today the French missionaries' legacy is still palpable in Yunnan, with several old churches dotting the province, plus thriving coffee and wine industries that owe their origins to beans and grapes introduced by the missionaries as they traveled the province. 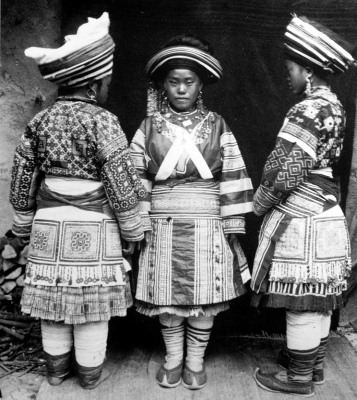 The above image is of three young women belonging to the Miao ethnic group (苗族), also known as Hmong. François took the photo while in Mengzi (蒙自) in southeastern Yunnan. This photo sticks out within François' photos of China for having a more anthropological feel.

The Miao originally lived in southern China but eventually began migrating into the northern regions of Myanmar, Thailand, Laos and Vietnam in the 1700s for political and economic reasons. The Miao that stayed in Yunnan moved up into the mountains as more Han Chinese moved into the region. This isolation led to cultural and linguistic fragmentation of the Miao.

I thought Hmong people in the early years were taller. These Hmong women either short or stocky, or could it be the camera angle?

Taller than we are now? Taller than Hmong in Laos pre-Vietnam? Or taller than Hmong folks in the U.S., France, Oz? I would imagine that Hmong in the West would be taller, what with being better fed and all. Additionally, there is no indication of the ages of the three "women" pictured above. They could be children for all we know, but women by the standards of the day.

I thought White Yi (白彝)is the slave branch. .. AT least MY grandpa told me that.

There is a lot of information about relations between Lolo (Yi) people and other groups in north-west Yunnan in Peter Goulart's 'Forgotten Kingdom' novel, online here: pratyeka.org/books/forgotten-kingdom/

"The prominence of Hmong people in the West has led to the situation where the Miao nationality is sometimes referred to as Hmong, despite the fact that they are only one of the sub-groups contained in the classification."