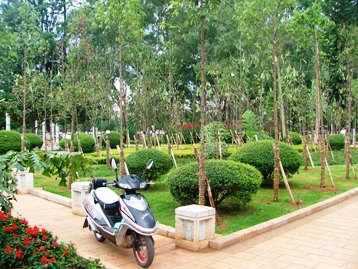 This year in Kunming, public works projects have been bigger and more frequent than in recent years. From the Xiao Ximen 'turtle back' flyover to the installation of thousands of surveillance cameras citywide to the conversion of major roads into one-way streets, it seems that one is greeted by change whenever one steps out the door in Kunming.

The most recent bit of change to affect Kunming residents is a bold and somewhat controversial plan to plant 800,000 trees throughout the city this year. As of June more than 200,000 trees had already been planted in the city's four major urban districts.

While most Kunming residents appear to support increased green space and plant coverage in the so-called 'Spring City', the fact that many of the new trees are small and weak and have been planted on already cramped sidewalks has drawn criticism from pedestrians. 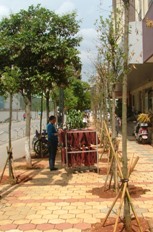 "How are people supposed to walk down the street when there are two rows of trees in the way?" asked a university student surnamed An, as she walked down Weiyuan Lu. "Looking at all these scrawny trees in the way it's hard to believe that there's a plan behind this."

There is a plan, and it is a big one. As Kunming Municipal Parks Bureau Director Zhang Jiaren (张家仁) recently informed Kunming daily Dushi Shibao:

Even areas known for their green space such as Cuihu Park have not avoided the tree invasion. Hundreds of trees – dozens of which have already died – have been added to the promenade encircling the park, drastically affecting views of the park as well as impeding the area's heavy foot traffic. 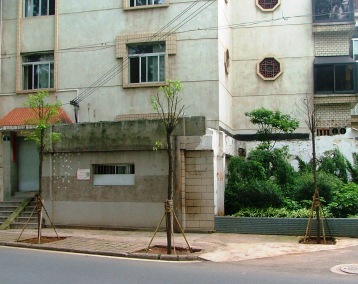 In addition to the location of the trees, the massive project's funding has also become a sore point for local business owners, who are being forced to help foot the bill for the planting spree.

"We have to pay for these trees, but that one's already dead," said a manager of a business on Huancheng Nan Lu surnamed Wang. "Why are these little trees being planted in the shade of much larger trees?"

GoKunming spoke to several business owners and managers in the city's downtown area and discovered that businesses with newly planted trees in front of their commercial space have been asked to pay 550 yuan per tree. Many of the people we spoke with said they've been asked but haven't been forced to pay up – yet. According to a Dushi Shibao report last month, the city's strategy to pay for the trees is 'plant first, levy later'.

Although most of the businesspeople GoKunming spoke to support the idea of more trees in the city, many spoke of the trees planted near their businesses bringing differing degrees of inconvenience. For any businesspeople thinking about taking matters into their own hands, it should be noted that Director Zhang of the Kunming Parks Bureau has already issued a warning to businesses that intentionally harm the trees:

"We're guessing that the restaurant poured boiling water on the trees to scorch them to death. We'll replant trees, but if it happens again we'll ask the media to expose what they are doing."

Construction of 'Turtle back' throws Kunming traffic into chaos

i do not like this. they diged holes for trees, and then found they can not grow trees there. and then, fill the holes with soil again. but both cost lots of money. and we pay for that.

The media should be exposing the foolishness and corruption of the officials that initiated this movement. Kunming is planting 800,000 trees while people in Sichuan are living in tents? They bring these trees from the place where they were living and purifying the air into the city where they die. It's not helpful to the environment.