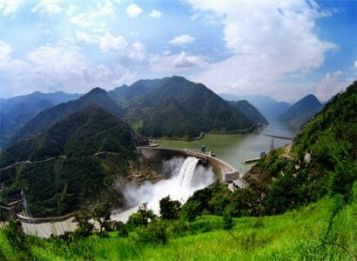 China is home to an estimated 85,000 dams nationwide, more than 40 percent of the world's total. A large portion of those are in southwest China, especially Sichuan and Yunnan, whose rivers have their headwaters in neighboring Tibet.

Monday's magnitude 7.8 earthquake in northern Sichuan province highlights one of the vulnerabilities and inherent risks of China's prolific dambuilding in its southwest. Major rivers include the Jinsha, Nu and Lancang rivers, the headwaters of the Yangtze, Salween and Mekong rivers, respectively.

Sichuan's Tulong and Zipingpu reservoirs suffered damage from the quake, endangering the downstream city of Dujiangyan and its 500,000 residents, according to a Reuters report citing a local official.

According to the report, Sichuan's Yuzui levee, the linchpin of the Dujiangyan system, has also sustained damage from the quake, with cracks appearing. China's Ministry of Water Resources said the cracks were not serious.

In addition to Sichuan, the ministry has sent teams to the regions of Yunnan, Chongqing, Gansu and Shaanxi to assess earthquake-related damage to local dams. The majority of Yunnan's dams are far from Kunming and other major metropolitan areas within the province.

Xinhua quoted Water Resources Minister Chen Lei as saying that "local governments should monitor (dam) projects, to discover and repair damage as soon as possible. In case of danger, make sure to transport people to safer places."

Newer dam projects are tending to be larger than before, such as the Xiluodu Power Station, a dam that is being built on the Jinsha River between Sichuan and Yunnan. The hydropower project is scheduled for completion in 2015 and will be China's second-largest dam after the Three Gorges project.

Between the dams and the fracking we are all in for some shaky times ahead.