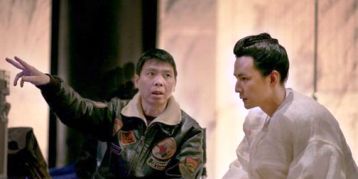 Feng Xiaogang on the set of The Banquet

Beijing-born director and writer Feng Xiaogang (冯小刚) will be joining the faculty of Dali University as a guest professor, according to a Dushi Shibao report.

During a three-day stay in Dali's old town last week, Feng was approached by Dali University regarding a guest professorship at the school. Apparently enamored with Dali – he reportedly said he hoped to shoot a film there someday – Feng met with officials at the university and accepted the invitation. No details have been made available regarding the schedule or content of his classes at Dali University.

Feng is director of several major mainland films since 2000, including The Banquet (夜宴) and Cell Phone (手机). He has also written and directed the films A World Without Thieves (天下无贼) and Big Shot's Funeral (大腕) and has acted in several major productions, most notably in a cameo role as the Crocodile Gang Boss in Stephen Chow's action comedy Kung Fu Hustle.

Already a popular getaway destination for Chinese directors, actors and writers, Dali is expected to become increasingly competitive in terms of attracting new film and television projects in the next few years as Chinese studios seek alternatives to Beijing and Shanghai.

'China's Hollywood' to be built in Kunming