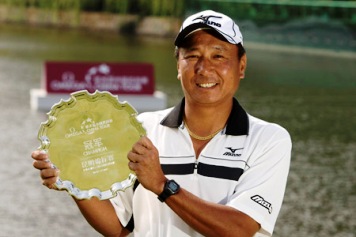 Lu Wen-teh's one-over-par 73 earned him the US$115,000 Kunming Championship and made him the Omega China Tour's first non-mainland champion this weekend at Lakeview Golf Club. The Taiwanese golfer said winning his first title was a "dream come true".

Equally notable was the strong showing by two teenage amateurs. Lu's playing partner, 16-year-old Benny Ye Jianfeng, finished second after winding up the day four over par, while 18-year-old amateur James Su Dong's even-par 72 lifted him to third place. The high finish by two teenagers suggests that the next generation of Chinese golfers is starting to come into its own.

After Lu was presented with a trophy and check for 150,000 yuan on Lakeview's 18th green, the three golfers were drenched by spectators and caddies in honor of the Dai Water splashing festival (泼水节), which was celebrated throughout southern Yunnan yesterday.

"I was able to hold on to my lead because I've been there before, but I was really impressed with what I saw this week," said Lu, who posted a five-under-par total of 283 to finish seven ahead of Ye and 10 clear of Su on a windy day at the Nick Faldo-designed course.

"The Chinese players are much more professional now than when I first played here more than 10 years ago. The younger generation are exceptional."

Lu went professional in 1992, the year after Ye was born, and has since won over US$1 million on the Asian Tour alone. The golf veteran had nothing but praise for the younger Ye.

"Ye Jianfeng hits the ball really well, even though he's so skinny," laughed Lu. "He played very well and is really a good player, one to watch. I had a lot of fun playing with him." 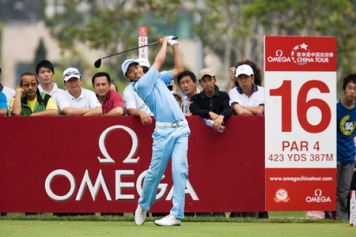 Ye closed with a 76, a full 10 strokes more than his course-record 66 on the third day. However, the Shenzhen Nanhua High School student said he was pleased with his highest finish on the Omega China Tour, improving on his tied-fourth place in last year's Sofitel Golf Championship.

"I'm so excited. I never thought I'd be here. Every time I play in professional events, my aim is to just make the cut, so this is just great. Yesterday's 66 was my best score in a pro event and I'll remember that round forever," he said.

Ye will play in next week's US$2.2 million Volvo China Open after winning last year's Volvo China Junior Championship.
Vancouver-based Su said he was surprised to finish in the top three with a 72, but acknowledged the effect that the unpredictable Kunming winds were having on everyone at Lakeview yesterday.

"It was tough today because the wind was changing every second. However, I really like this course as it encourages you to drive long," added Su, who hit his tee-shot on the 472-yard 13th hole almost 400 yards.

With Ye and Su picking up flowers instead of paycheques, Jim Johnson, Chen Dinggen and Kunming-born Liu Anlin each won RMB54,000 for sharing fourth place on six-over.

The Omega China Tour was inaugurated in 2005 with four events, and since then two tournaments have been added each season. This year's 10-event Omega China Tour offers total prize money of RMB8 million (US$1.15 million). After a 'southern swing' of six events from March to June, the tour takes a break for the Olympics before a 'northern swing' of four events in September and October.