Every day thousands of people stream in and out of Green Lake Park (aka Cuihu Gongyuan, 翠湖公园), with all but a handful passing by the statue of one of Yunnan's most famous patriots — Nie Er, the composer of China's national anthem.

Nie Er (聂耳) was born in Kunming in February 1912 to parents from Yuxi. As a youth, Nie's musical talents emerged quickly, first at Yunnan Normal School Associated Primary School, where at the age of seven he could already play several Chinese instruments and was the conductor of the school's children's orchestra. 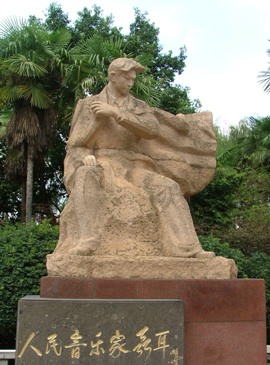 In his teenage years during the 1920s, Nie broadened his musical horizons, learning the piano and violin. Unable to ignore the political turbulence that was engulfing China in the 1930s, Nie also began to decide where he stood politically, which ultimately led to his decision to join the Chinese Communist Party in 1933.

Over the next couple of years, Nie penned 37 songs, often working with lyricist Tian Han. They collaborated on the song 'March of the Volunteers' for the patriotic film Sons and Daughters in a Time of Storm, a song which was used to rally the Chinese populace against the Japanese army.

Nie Er drowned in Japan in 1935 en route to the Soviet Union in his attempt to escape the wrath of Chiang Kai-Shek's Guomindang troops, who were more interested in exterminating Communists than fighting the Japanese. He was 23.

'March of the Volunteers' was selected China's national anthem in September 1949, just days before the founding of the PRC. It has remained the national anthem, not counting during the Cultural Revolution, when it was temporarily and unofficially replaced by 'The East is Red'.

Nie Er's statue can be found in the west side of Green Lake Park, just to your left if you enter the park through the zigzag walkway at the park's southwest corner. The only inscription is 'The People's Musician Nie Er'.

Inspiration for this post came from Danwei's post by Peter Micic last week about Nie Er and China's national anthem. Click here for the full story.