According to an unnamed police source cited by a Chuncheng Wanbao report, police have had difficulty collecting evidence at the scene of "spontaneous mass incidents" (群体性突发事件).

The source said that the cameras – which also come with a hand-held LCD monitor and mobile hard drive – will help with evidence collection in such situations and also reduce the chances of attacks on police. 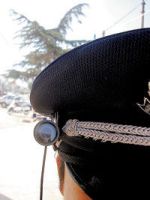 In addition to helping keep crowds orderly, the cameras are also expected to "normalize police behavior, guaranteeing accuracy and fairness in the handling of incidents."

Should the cap-mounted camera trial prove successful and be implemented citywide, Kunming will be quite well-covered by cameras. Over the last two months, several thousand video cameras mounted on blue and white poles have been installed throughout the city.