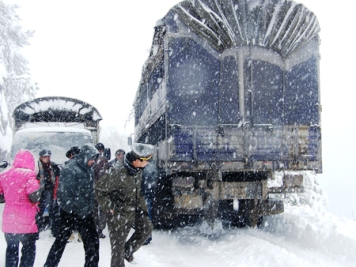 Diqing prefecture in northwest Yunnan has continued to be hit by heavy snowfalls, with the town of Shangri-la (Zhongdian) receiving 35 centimeters of snow since January 19. The winter storm has shut down much of the area and is causing serious damage to the area's economy and infrastructure.

Transportation and tourism have been affected, with the airport at Shangri-la and tourist spots in the area temporarily closed. The highway linking the city of Shangri-la and Kunming is still operational, but numerous roads throughout Diqing have been shut down by the blizzard.

According to initial government estimates cited in Kunming media reports about 100,000 people have been hit by the winter storm, which is estimated at having caused 75 million yuan in damage to the area.

More than 50 million yuan of the damage was agricultural, with more than 20,000 tons of grain destroyed and 4,600 head of livestock dead. Diqing's power and communications networks have also been hit hard by the blizzard with 12 power transmission lines out of operation and more than 500 power line poles down.

December 1, 2021 "Summit Language school is looking for qualified and enthusiastic teachers to join our team starting as soon as possible. The school is location in We …"
Living in Kunming livinginchina