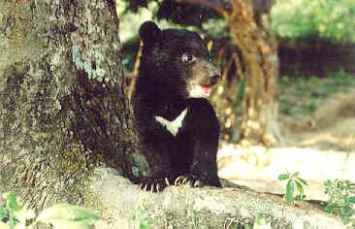 In what appears to be an unintended effect of conservation efforts in Yunnan's Three Parallel Rivers Protected Areas, black bears are increasingly raiding farms and homes of residents inhabiting nearby villages, according to a recent Xinhua report.

The black bear population in the area, which has been on UNESCO's World Heritage List since 2003, has grown considerably since a government ban on bear hunting in the early 1990s, the report quotes Feng Yuzhong, a resident of the town of Shuangla in Yunnan's Gongshan Dulong Autonomous Prefecture.

According to Feng, black bears from the nearby mountains have killed more than 20 sheep and destroyed more than 150 mu (about 10 hectares) in Shuangla's Bingzhongluo village since August. This year alone at least 26 villages in Gongshan County have experienced similar bear problems, with scarecrows, bells and dogs proving ineffective at keeping bears out of inhabited areas. It is believed that the bears are making incursions into the villages because of a lack of food in the mountains where they dwell.