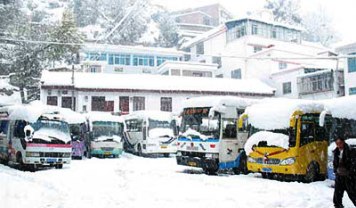 After more than 50 hours of heavy snow, the weather in Diqing Prefecture began to clear yesterday and the snow along the roadside of Shangri-la has begun to melt. Since the opening of the two main roads to Deqin County on Saturday, most of the more than 100 trapped tourists who were scattered throughout different scenic spots since last week have been transferred to the town with the help of the local government. Deqin is located in northwest Diqing, near the border with Tibet.

The heavy snow that covered the greater part of Diqing began falling last Wednesday, with more than 50 centimeters covering roads and everything else, leading to a transportation shutdown. Mudslides and other problems have plagued National Highway 214 and much of the region has been without electricity. So far no casualties have been reported in the area and electricity has been restored to most of the region, according to government reports.

The Deqin and Dewei segments of National Highway 214 have been restored to one-way operation and the local government is busy repairing and restoring much of the road and surrounding roads.

At the moment, the Deqin government is focusing on restoring access to the road linking Deqin to the Meili Snow Mountain Xidang Village scenic area. The blocked road has left a team of mountain climbers from Shanghai trapped since last week.

June 19, 2021 "Chinamultiservice Consulting Co., Ltd. is an Italian invested and managed consulting company based in Kunming with a 10-plus-year business experience. …"
Living in Kunming lemon lover