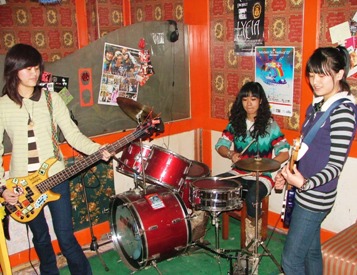 Finding the underground scene in any city always takes a little digging - last Friday night it meant searching around a sketchy former 'KTV' near Kunming's north rail station. We were searching for No Answer (打死我也不说), the all-girl punk band that stole the show at a night of music at Shelter Bar earlier that week, despite being the opening act.

After making our way down a narrow alley and up two dark flights of stairs, we came upon a red hallway with pink lighting and small rooms named after the Western zodiac. The entire floor of small rooms had been converted into small practice spaces rented by local bands. At the far end of the hallway a rock band was practicing loudly. We were greeted by Shi Yang, No Answer's 18-year-old guitarist, who led us to her band's practice space.

Shi Yang and bandmates Jiang Yuhan (bass, 21) and Yang Yang (drums, 19) have been practicing together every day in their small rented space since forming two months ago. Although they've only been playing together for a short time, they are already one of the city's tightest and more interesting musical acts.

As with most Chinese punk bands, No Answer is heavily influenced by Western punk bands - Bikini Kill, Action Pact and the Yeah Yeah Yeahs being their favorites. So far Their favourite song to play at the moment - all of their song lyrics are in English - is the edgy "Big Aunty", which explores the feelings of crankiness that accompany premenstrual syndrome.

Although Kunming's music scene is typically dominated by men - many of whom dismiss the girls as having too heavy a feminist slant - No Answer said they're just writing about their experiences and feelings. Drummer Yang Yang, who's been playing drums since age nine, said the band wasn't interested in being pigeonholed as feminist. "We're just making music about our lives," she said in between puffs on her cigarette, "Making music that other women can relate to is a way for women here to have more self-respect."

Elder band member and bassist Jiang Yuhan said that although the trio is currently playing punk they are also beginning to develop a more New Wave sound with the songs they are currently writing and practicing in their slightly cramped practice space. According to Jiang, the band loves punk but wants to explore other musical styles. "Good music has no style - it's anything that touches one's heart," she said.

For the short term, No Answer is working on new songs in preparation for an upcoming demo. The band will also be playing their first festival gig at the Kunming Outdoor Music Festival this Saturday in Taiping town outside of Kunming. They are scheduled to take the stage around 7 pm.