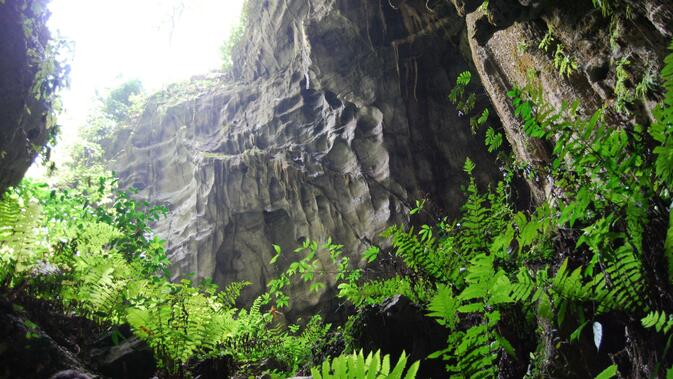 Image credit: A Monro via KEW

New data on cave flora was published recently in the scientific journal PLOS ONE by researchers from the Royal Botanic Gardens, Kew and the Guangxi Institute of Botany (GIB). Over a five-year period from 2009-2014, researchers delved into the depths of some of China's least explored caves in the largest ever study on underground flora in China. Surveying more than 60 caves in Guangxi, Guizhou and Yunnan provinces, Kew's Alexandre Monro and his colleagues from GIB were able to assess vascular plant diversity of cave flora in more detail than previous related studies.

From the 1950s to the 1970s, forests in SW China were virtually wiped out due to the demand for charcoal associated with rapid industrialization during the Great Leap Forward and the Cultural Revolution. This study documents 31 species known only from caves, leading the team to conclude that cave populations are all that remain of species which once grew in the 'understory' — the layer of vegetation between the forest canopy and the ground) of China's old-growth forests. These discoveries make these caves and their flora significant and valuable for species conservation in southwest China. Lead researcher Monro explained the findings further, saying:

This collaboration with the Guangxi Institute of Botany in China is a first attempt to document the presence of vascular plants in caves in Southeast Asia. Before we started we had no idea of the diversity of plants in caves, or that so many species are known only from caves. We hope that this work will lead to greater interest [...] amongst botanists, and also to a greater interest in plants amongst cave biologists, prompting more study of cave-rich landscapes in [the region].

Over the course of the study, 418 species of vascular plants were recorded, with seven percent of them endemic to the explored caves and 37 percent endemic to China. Once all caves have been sampled in the region, the real figure is likely to be between 500 and 850 species, based on modeling conducted by the KEW-led team.

The other conclusion of the study is that the twilight zones in caves can be considered distinct biomes for plants based on a combination of constant and aseasonal climate, as well as very low light. The authors document plants growing in some of the lowest light levels recorded for vascular plants, suggesting a broad range of plants can photosynthesise at much lower light levels than originally thought.

While exploring the entrance caverns, the team observed that almost half of the caves sampled were impacted by tourism or agriculture, with tourism being the more frequent cause of damage to these unique ecosystems.

Editor's note: This article was compiled from a press release originally published by the Royal Botanic Gardens, Kew.

Very useful, if one is interested in conserving genetic resources. Thanks for noting this.