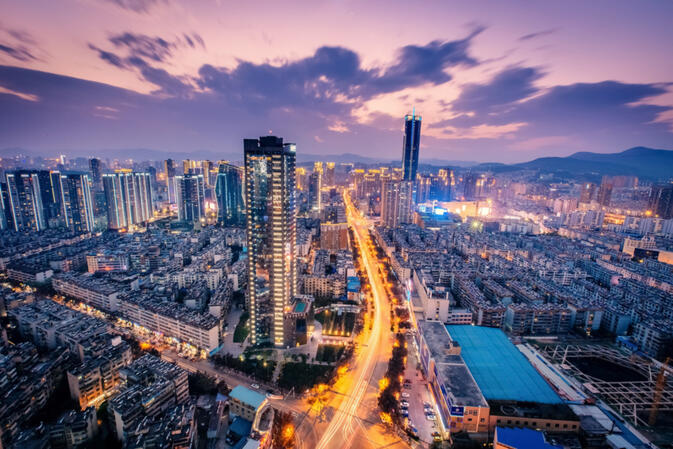 Kunming city planners have closed a large section of Baiyun Lu (白云路) for the foreseeable future. The road shutdown is part of an enormous project which includes creating new utility infrastructure, building an underground multi-use structure, widening the road and, of course, beautifying the affected area. Construction is expected to last at least 18 months, according to the government-operated news outlet Yunnan Net.

The 2.2 kilometer-long closed stretch of road begins from Wanhua Lu (万华路) in the west, cuts across Beijing Lu (北京路), and ends at Wanhong Lu (万宏路) in the east. Through-traffic along Beijing Lu is not expected to be affected. The undertaking is perhaps ominously dubbed the "Baiyun Lu Air Raid Shelter and General Street Upgrade Project" (白云路地下人防及道路综合整治工程).

It comes with a one billion yuan (US$153 million) price tag, two-thirds of which has been allocated to "civil air defense" concerns. Those considerations include fabricating an underground facility capable of housing 20,000 people and storing adequate stockpiles of food and water to keep them alive. The 70,000 square-meter 'bunker' is planned to contain retail, dining and entertainment outlets "during peacetime", while acting as a safe haven for Kunming residents in "times of war, natural disasters or other public emergencies".

Above ground, Baiyun Lu will be widened to 40 meters, a distance including designated lanes for cars, buses and bicycles, as well as space for sidewalks and plant-lined medians. Additionally, new lines for natural gas, electricity, internet, sewage and drinking water are scheduled to be installed. The renovated street will feature at least 50 entrances to the planned underground structure, which will also provide access to Metro Line 2.

From a commuter standpoint, the next year and a half could be a traffic nightmare in and around the neighborhoods of Baiyun Lu. In an effort to circumvent some disruptions, city planners have temporarily rerouted 12 bus lines passing through the area. A complete list of detours is available here in Chinese. Route changes are scheduled to last through the new year.

As for the current need of a multi-use bomb shelter and shopping mall, no clear rationale has been given by government planners. However, such facilities are nothing new in the Spring City. Below ground, Kunming is rumored to be honeycombed with a maze of interconnected former bomb shelters, some of them dating back to the 1930s.

One example lies beneath the zoo on Yuantong Mountain (圆通山). The bunker there has been at least partially available as a commercial space for years, although no one has yet been able to capitalize on the kitschy meter-thick walls and bomb-proof steel doors. Perhaps creation of the new Baiyun Lu shelter will make such locations fashionable.

room for 20 000 people, a couple of xiaoqu then. not enough for all the people who live along the 2.2km of that road

Beijing lu in that area is now a nightmare, especially at rush hours. It was bad before but somehow it got worse and the daily car parks start somewhere past the ring road for those going south. the pedestrian crossings are a nightmare with pedestrians, cars and bikes/ebikes all competing for the same space. any of the above can now come from any direction at any time. the traffic lights are useless and so are the crossing people/police. One good rainy night and the whole intersection of Baiyun Lu and Beijing lu is flooded. It seems that nobody considered drainage.

nobody is going to bomb Kunming

You probably couldn't get a mandate to redevelop an area and build an underground shopping mall. Especially if it causes major disruption.

There is an existing mandate to build bomb shelters, and there are added benefits to both the infrastructure and opportunities for business that can be captured too :-)