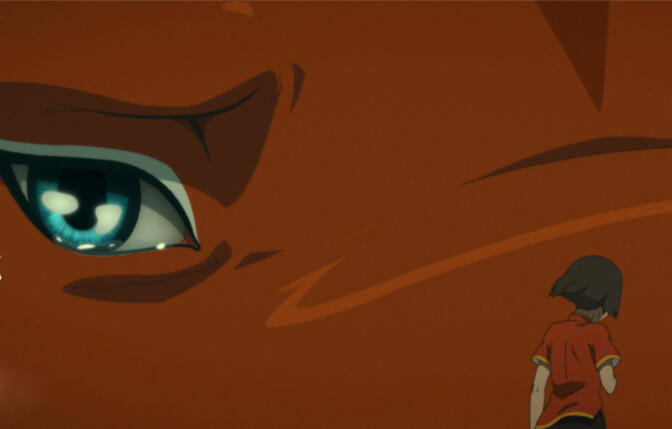 A hundred years have past already since I was 117 years-old. Every time I tell the people around me "All living humans are whales in the ocean. Our lives have passed over to the ocean", they do not believe me. They say I'm old and confused. But every time I dream, I see hundreds of big fish swim down from the sky and their beautiful voices awaken my memories. My name is Chun and I come from the World Under The Sea. Our sky links with humanity's ocean. We are in charge of the souls and we are in charge of the patterns and movement of all the things on earth. We aren't humans and we aren't spirits — we are others.

In 2004, Liang Xuan (梁旋) and Zhang Chun (张春) published a flash animated short film they called Big Fish (大鱼) . It was 7:34 minutes long and featured a rather minimalistic character design and animation style. It was well received by online audiences, and fan support was the main reason why the two producers decided to make it into a feature-length film, which would later be named Big Fish and Begonia.

Considering it was the early 2000s, the original episode of this animation has huge differences in both style and characterization from the finished feature length film. It took four years and the formation of a new studio, b&t (彼岸天文化), to secure enough funding to make Big Fish and Begonia. 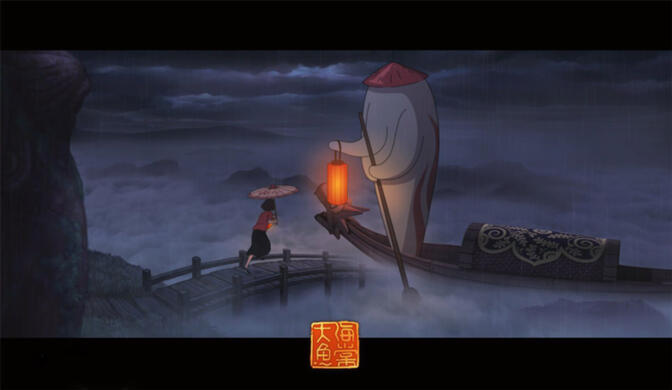 The main problem turned out to be the doubts that many investors seemed to have. Despite being interested in the story, no one wanted to believe that the film could be a financial success. In 2013 b&t Studios used their Weibo page to begin a crowd-funding campaign to hasten production.

The campaign's success caught the attention of Beijing-based Enlight Media (北京光线影业), which supported the film to completion. This still took three more years. But imagine the surprise in 2016 — a full 12 years after the short film debut — when Big Fish and Begonia grossed 227 million yuan (US$34.3 million) during its opening weekend. In comparison, it took the computer generated epic Monkey King: Hero Is Back a full three weeks to hit the US$50 million mark.

It might make you wonder, what is it about this odd animated movie that moved so many people to praise it and for some to even call it the "new dawn of Chinese animation". For many fans, Big Fish and Begonia embodied the most anticipated animated film of 2016. Not only its rocky road towards completion excited people, but also the use of several modern animation techniques creating a unique 3D adventure that includes hand-drawn traditional frames enhanced with computer generated touches. 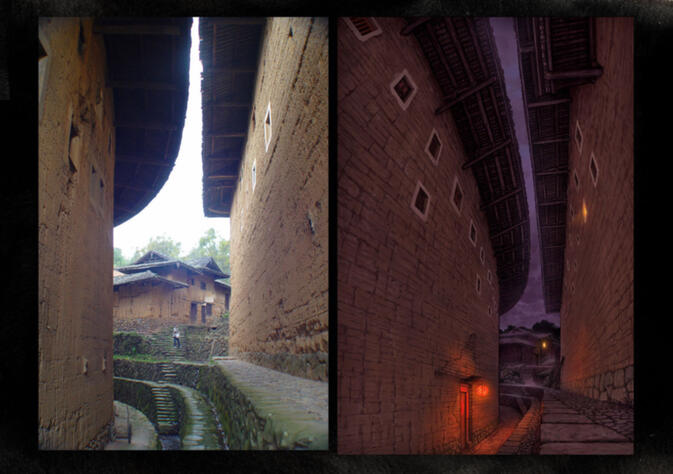 The film is able to amaze its audience throughout its 94-minute runtime because the plot is an epic fantasy merging Chinese mythology and well-known Japanese animation techniques. One of the most remarkable aspects is the recreation of Hakka (客家) tulou architecture. The Hakka people are an ethnic minority who mostly inhabit the southern Chinese provinces of Jiangsu, Fujian and Guangdong.

In the film, many families of the World Under The Sea live together in communal structures that comprise either round or square walled villages, just like real Hakka towns. These buildings are up to four stories in height, have only one main entrance and some of them hold smaller walled houses within. Interestingly, the movie producers used actual tulou located in Fujian and Guangdong, taking photos and redrawing the scenery of those villages for Big Fish and Begonia.

Using real scenery and attaching magical elements to it has the advantage of familiarity. This device makes it easier for the viewer to focus on all of the supernatural content. For sure, as a person who has visited Fujian province's tulou, it was a nice nostalgic feature of the film. In Big Fish and Begonia, all the residents of the tulou are magical people and creatures.

Most of the characters resemble humans and they have magical abilities based around the five elements — water, wood, fire, earth and metal. With these powers, they basically control nature and natural happenings in their own world and that of humans. Side by side they live with other magical creatures who inhabit the forests, rivers and sky of their world.

From time to time some of them resemble famous Studio Ghibli characters, leading many reviewers to believe that the film was inspired by Spirited Away. In some scenes this suspicion seems to be true. Then again, the story, creativity in character and setting design and animation techniques are unique enough that this guess stays a guess.

What is clear is that Big Fish and Begonia is loosely based on tales from the Zhuangzi (庄子), as well as other Daoist texts such as the Classics Of Mountains And Seas and In Search Of The Supernatural. The story of Big Fish and Begonia follows 16 year-old Chun (椿), who is about to participate in a yearly coming-of-age ritual in which all teenagers of the community turn into red dolphins and get to swim through a watery passage into the human world for seven days. The purpose of this tradition is for the young to see the human world and become familiar with its natural patterns. In this way they can learn to understand the interaction and balance between their own world and the human one. 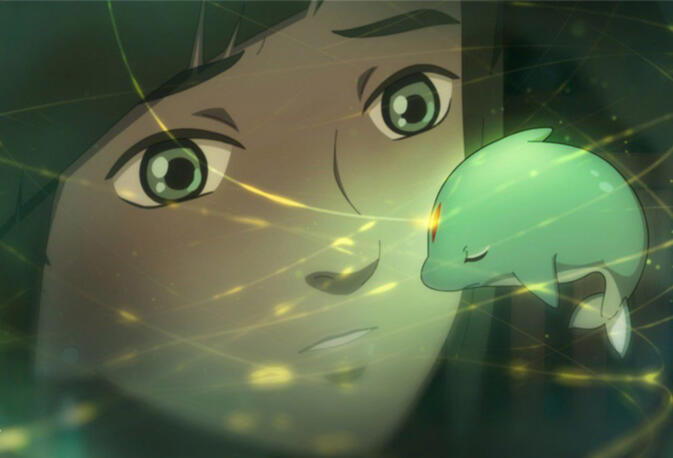 Although they're not supposed to get close to humans, Chun meets a young man who lives near the watery passage that brings her and others to the human world. Due to a tragic accident, the boy dies. Chun is devastated as she fells deeply responsible and returns to her world to find a way to give the boy his life back. The solution turns out to be a bargain — in exchange for the boy's resurrection, Chun has to give half of her own life to a Soul Keeper.

In Chun's world the soul of the boy manifests itself as a small white baby fish with a red triangle on its forehead. If she wishes for the boy to go back to the human world, the Soul Keeper tells her that she must protect the fish and let it grow to full size before he can return home through the passageway. Together with her childhood friend Qiu (湫), Chun decides to give the fish the name Kun (鲲), which she chooses because it is the name of a gigantic fish from the Zhuangzi.

Soon they encounter hardship as Chun's mother finds the fish and throws him out. Not long after that, Qiu, who feels more then friendship for Chun, finds out about the price of the bargain and Chun giving up half of her life for Kun to live again. The Soul Keeper reveals to Qiu that Chun will die when Kun returns to the human world, as her life and Kun's are now linked. However, the more Qiu sees Chun and Kun together, the more he understands her feelings and self-sacrificial decision. 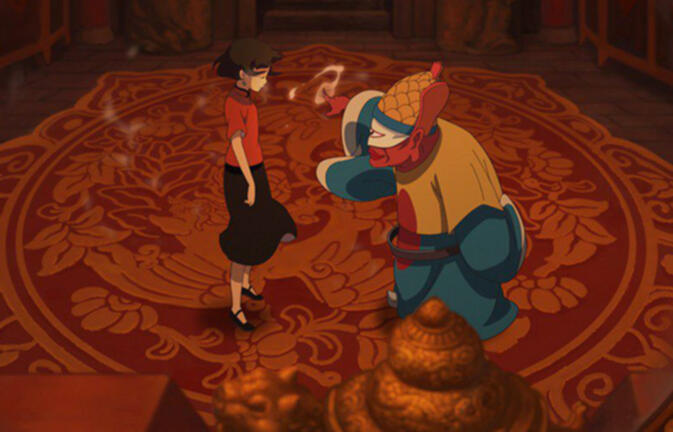 Unfortunately, Chun's actions don't go without consequences. When a human dies, its soul transforms into a whale meant to join the World Under The Sea, meaning Kun should not be revived as a human. Chun's bargain therefor is a violation of her world's natural laws, causing it to lose balance. Natural catastrophes ensue. In addition, Chun's family and the rest of the residents are anything but happy to find out who is responsible for the disruptions in their world. Only with the help of Qiu, the Soul Keeper and her grandparents is Chun able to make sure Kun returns to the human world.

Reviewing this film made me realize once again how much work the animators and producers put into it and how much heart they put into the story. While the key elements are friendship and young love, the impressive backgrounds and astonishing character detail in particular are what make this film remarkable. b&t Studios created a fantasy epic that has its own charm and can take your breath away using colors and composition. Big Fish and Begonia certainly has great potential to delight Western audiences, just as it did Chinese ones.

Big Fish and Begonia is available for free online with English subtitles on YouTube. 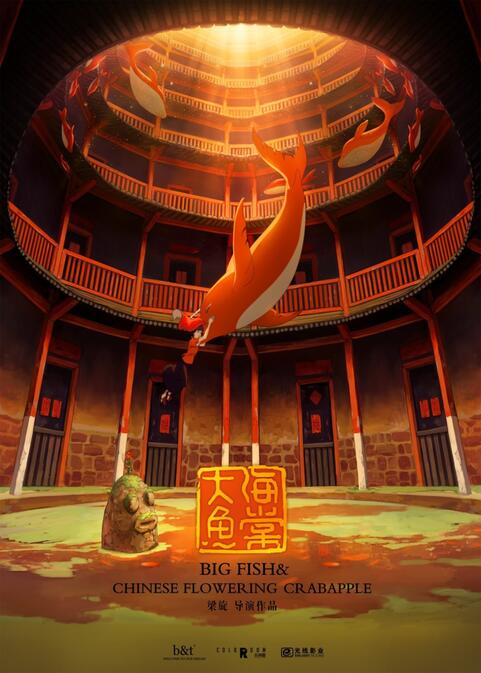