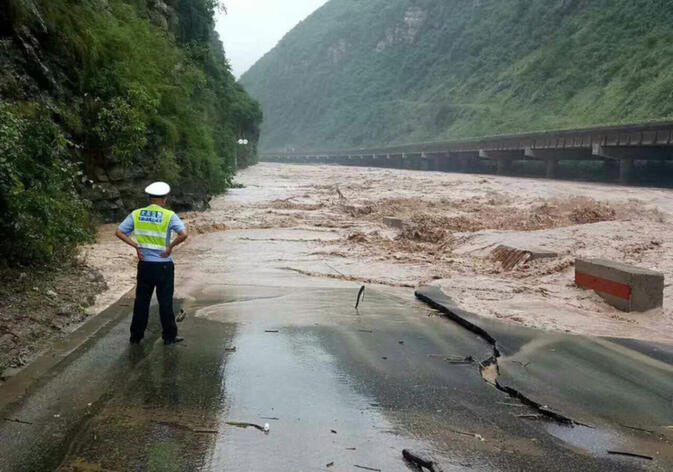 The remnants of Typhoon Hato — in Chinese called Tiange (天鸽) — blew through Yunnan this past weekend, dumping large amounts of rain on areas already waterlogged by a persistent and soggy rainy season. The provincial government sent search and rescue teams, as well as aid, to several remote villages attempting to dig out following landslides.

Zhaotong in the northeast and Honghe in the south suffered the most extensive damage, as Tiange was downgraded to a tropical depression over Yunnan. While far more mild than when it battered Hong Kong and the provinces of southern China, the weather system nonetheless dropped significant amounts of rain, in some places at a rate of seven centimeters an hour.

The village of Jinping (金平州) in Honghe was especially hard hit when a hillside waterlogged after two months of ongoing rains gave way. The resulting mudslide killed two people and seriously injured at least six others. Government relief agencies trucked in fresh water and other supplies while relocating 450 people living in the village over fears that another landslide is possible.

Meanwhile in Zhaotong Prefecture, flash floods and landslides crippled several areas. In Yanjin County (盐津县) on the border with Sichuan, six people are missing after their houses collapsed in a flood. More than 2,600 people have been moved after landslides created a 200,000 cubic meter barrier lake across the nearby Longdong River (龙洞河).

In Yiliang County (彝良县), just south of Yanjin, soldiers from the People's Liberation Army rescued 1,600 people who were trapped in a train station by floodwaters on Saturday. Small landslides were common across Zhaotong Prefecture over the weekend. Highways and mountain roads in the region — already one of China's poorest and extremely prone
to landslides — were closed by avalanches of mud. In response, disaster relief teams from the army have been dispatched to each of the prefecture's 11 counties to help dig out.

Although Hato has largely blown itself out, rain-soaked areas in Yunnan may not get much respite. Storms are forecast for much of the province as the remnants of tropical storm Pakhur carves the same path as Hato. In places such as Pu'er and Honghe, the provincial Civil Affairs Bureau is gearing up to prevent what rescue workers often refer to as "secondary disasters" by temporarily relocating nearly 10,000 people.