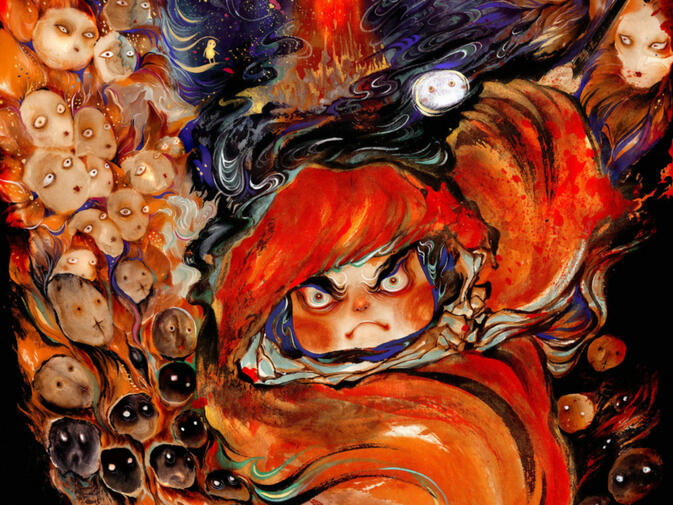 Not one year passes by without at least a few animations coming out. By now we're almost used to see 'just another' photo-realistic 3D animated film by well-known groups like Pixar, Dreamworks Animation, Walt Disney Animation Studios or Warner Animation. From time to time we're blessed with a 'tradigital feature' — a play on the words 'traditional' and 'digital' describing a celluloid or traditional animation which makes extensive use of computer technologies — from well-known studios such as the Japanese Studio Ghibli. Shown world-wide, these films have been entertaining people of all ages and they're also held in high esteem.

But what about the Chinese animation industry? It is no understatement that China has been drastically reinventing itself to the foreign eye in more ways than one, and the Chinese media world and its animation industry are no exceptions. In fact, China has released quite successful animated films over the past few years, including Monkey King: Hero Is Back (西游记之大圣归来), the Boonie Bears (熊出没) and the Pleasant Goat And Big Big Wolf (喜羊羊与灰太狼) series.

Another very well done effort was the 2016 film called Big Fish & Begonia (大鱼海棠), which, after more than ten years of financial struggle to fund the film, was considered "the dawn of the Chinese animation industry" and voted "the most anticipated animated film" in an online poll. Clearly taking influence from Japanese animation styles as well as those from Hong Kong and Taiwan, such movies create a unique blend of anime-inspired character design merged with Chinese symbolism and metaphors.

Chinese animations rank from traditional ones, such as the peculiar Chinese style known as shuimo (水墨动画) — or ink wash — to photo-realistic computerized versions to the now-popular flash animation form. Conventional films of this type, usually including traditional 2D animated cartoons or modern 3D computer graphic (CG) films, are mostly produced by well-financed corporations and released in cinemas. While flash animations range from amateurish to high quality creations, most of them are published online and referred to as online cartoons or 'webtoons'. These are usually hosted publicly on popular sites which provide a larger scale of freedom, creativity and expression. The recently released Chinese animation Dahufa (大护法) is a great example of the possibilities that flash animation provides for independent animators, as well as for the future of the Chinese animation market. 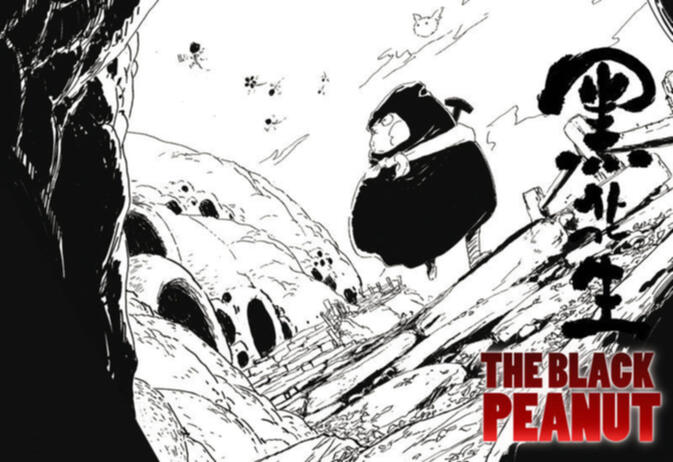 This turned out to be Dahufa in it's early stages of development. Throughout a time period of more than two years, and thanks to the support from animation fans from all over the world, Nice Boat were able to recruit more animators to speed up work progress and invest in visual effects to raise the production quality. Ultimately, this transformed the project from a 30-minute animated episode into a 100-minute theatrical animation available across China in both 2D and 3D. It received praise in particular for its unique way of combining anime-stylizations with traditional Chinese ink and watercolor effects inspired by fine art. 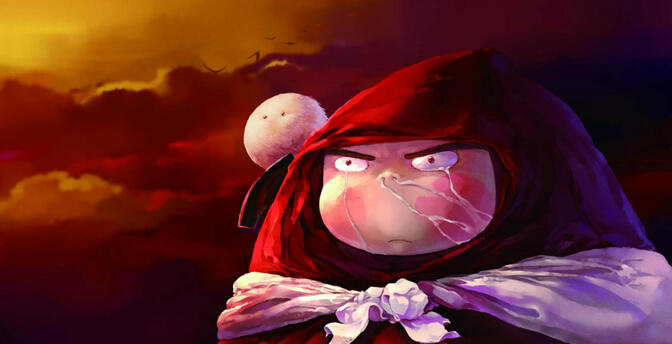 Dahufa tells the story of a little guy who is the 'Great Keeper of the Laws' in the kingdom of Yiwei (奕卫). Despite his rather small size, he is quite agile and has the ability to generate electricity from a metal cane he carries with him. His purpose is to find the Prince of Yiwei, who has run away to reject the responsibility to become king. On his search, Dahufa comes to a strange town where a gigantic black peanut hovers in the air.

The name of the town is Huasheng Zhen, or 'town of the peanuts' (花生镇) and the residents are called the huashengren — literally 'peanut people' (花生人). Upon his arrival Dahufa meets a resident of the town who sits on top of a large wall which seems to border the town. Dahufa carries a drawn sketch of his prince's face with him which he regularly shows to anyone he is encountering, asking them if they might have seen this person. Before he can receive a reply this time though, the resident runs away, leaving Dahufa curious and suspicious. 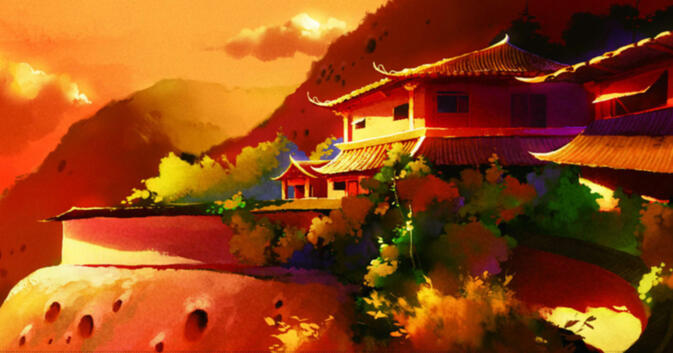 His instinct is not misplaced, because the town's authorities are not exactly welcoming towards foreign guests and Dahufa is attacked by the town's guards shortly after. He manages to get away and enter the town, but soon realizes that a dangerous and tyrannic human by the name of Ji'an (吉安) has established a brutal dictatorship in these lands, oppressing, abusing and murdering its residents for the purpose of his own lust for power and wealth. It quickly becomes clear that the autocratic system there has been present for generations, keeping the huashengren ignorant and unenlightened about themselves.

Even though the residents appear rather humanoid as they walk upright, and wear colorful clothes which resemble historical Chinese clothing, they are referred to as pigs by their ruler. Ironically enough, Ji'an makes them stick eyes and mouths made out of paper to their faces to purposely hide their real facial features and intensify their human-like appearances. He has also convinced the villagers that he is a God and they are to worship him, while simultaneously forbidding them to speak or form relationships with each other. All of this makes sure they forget who they once were and never question the situation in which they live. In addition, whenever huashengren curiously grow strange-looking black mushrooms on their skin, they are publicly executed. Since no explanation is provided for them to understand why they're treated this way, they find no courage to object and are left with no choice than to suffer the terrible conditions and live in fear. 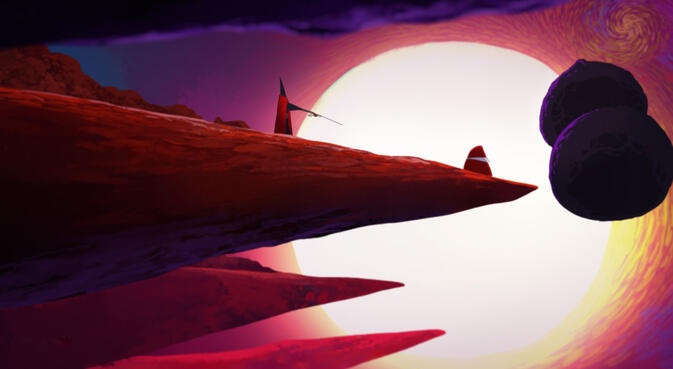 Since Dahufa's primary interest is to find his prince and bring him home, he doesn't bother getting involved in rebelling against the town's political system. But he eventually is forced to defend himself as the barbaric ruler fears the exposure of his despotism and orders his forces to make sure Dahufa never leaves the prefecture. As Dahufa locates his prince, he also involuntarily finds support and fellowship in a handful of residents who desire liberation and relief from their oppression.

Now are cast of characters has grown. There is the prince — a human enjoying the finer things in life rather than sitting on his rightful throne — who has found friendship in this odd place and wishes to protect those he cares about. There is Xiao Jiang (小姜), a huashengren who wonders about the circumstances and origins of his life and who wishes to leave the town to see the world. There is Xiao Ming (小鸣), who is friends with Xiao Jiang and the prince and who, as the grandson of Ji'an, refuses to become like his forebear. There's also Grandmother Yin (隐婆), a huashengren who is one of the few who remember a time before Ji'an ruled and who believes a rebellion could lead everyone to freedom.

With the situation already confusing enough, the plot turns even darker when Xiao Jiang learns the truth about how the huashengren are born and why they are being massacred. In addition, Dahufa ends up getting seriously injured in a showdown with the town's hitman, who is called Rodin (罗单). With all the murdering and undeniable horror that goes on in the film, there is a palpable feeling of relief when the residents of Huasheng Town begin to figure out what is happening to them when Ji'an gets tangled in his lies. Grandmother Yin also helps by deciding to finally share what she knows of the awful situation. With that, nothing is left to block the huashengren from rebellion and they are able to release the imprisoned and find salvation. 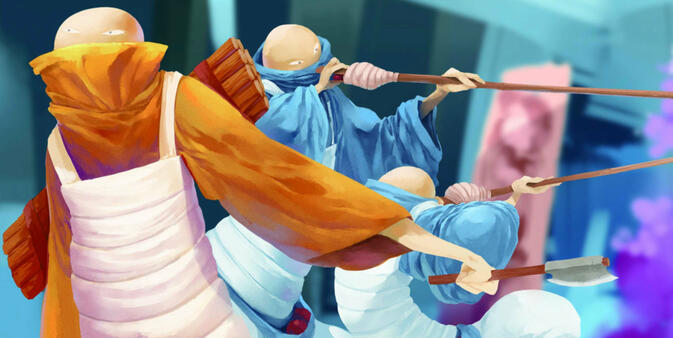 Dahufa is a pioneer in the Chinese film market regarding content rating. Although a rating system doesn't exist in China, the animators gave the film a rating of PG-13 on their own terms with the intent of preventing young children from seeing it due to it's rather graphic depiction of violence. To a person who is used to content rating system for films, the rating of PG-13 can seem almost too mild considering the immense amount of blood spill, the frequent decapitations and the shocking normality reflected in the reoccurring executions.

Although the animators went creative with the color of the huashengren's blood — which varies from green to blue or purple in color — the brutality in those actions remains. Not only do these matters scandalize, they also horrified some young viewers to tears, moving Weibo users to share posts and pictures in which they warn other parents of taking their kids to the cinema to see the film. 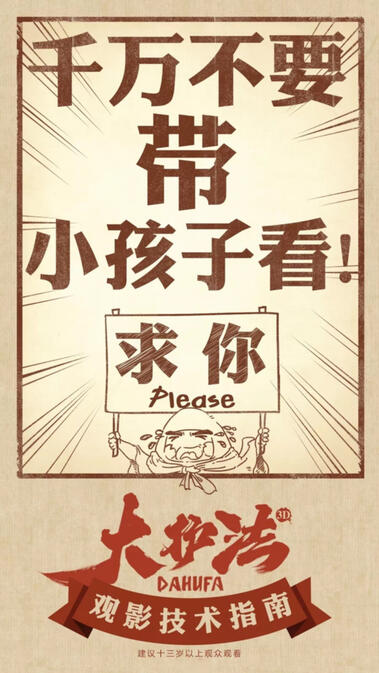 Many have argued that Nice Boat Animations, unfazed by the authorities, also deliberately put large numbers of metaphors for modern Chinese society into the film's plot. The huashengren being kept ignorant and facing oppression, they argue, relates to China's governmental politics. This interpretation intensified after the influential news outlet Communist Youth League (CYL) posted a critical article about the film on their official WeChat account one week after its release. The piece called Dahufa out for its "malicious political metaphors", whose supposed sole use was to increase ticket sales. Intended or not, CYL's reaction only promoted the film's popularity among Chinese moviegoers.

Still, not everyone is a fan. Some have criticized the film for being too inconsistent in regards to plot and storytelling. Others wonder how it even managed to get approved by the State Administration of Press, Publications, Radio, Film and Television. Considering the film's violent topics and its political ambiguity, this certainly is a mystery. However, the majority of viewers seem to be pleasantly surprised by the animation, as it currently scores a solid rating of 8 out 10 on Douban, surpassing the recently released US-production Despicable Me 3.

[Dahufa] conveys how I understand life and society. In China today, consumers want animations that are formulaic, fast and easy — like the McDonald's mushrooming all over the country. We the independents, however, believe that our work should speak to the anger and the frustration of the younger generation.

To be sure, the animation team did not release their film without ironic undertones and a wink and nod towards the Chinese public. In fact, they boldly decided to thank all the people who made things difficult for them on the official film posters with the words, "Many thanks to everyone who gave us difficulties" (感谢给我逆境的众生). Yet limiting Dahufa solely to a political message would be neglecting all its other topics.

The film's main theme may be the overthrow of an oppressive ruler, but it is also a story of bravery, deep friendship, love and not giving up for the pleasures of a more comfortable world, addressing these quite often in a surprisingly humorous way. Without doubt Nice Boat Animation have done remarkable work in character and background design, as well as in writing a captivating tale that can create new fans of animation and action films all over the world. 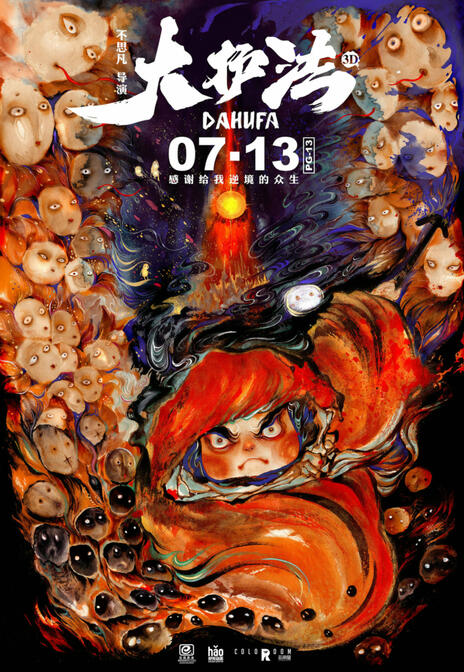 For really interesting works on the history and development of Chinese animation over many years, see the works of Weihua Wu, including CHINESE ANIMATION, CREATIVE INDUSTRIES AND THE DIGITAL CULTURE (another possible title: THE AMBIVALENT IMAGE FACTORY: ANIMATION, CULTURAL INDUSTRY AND THE I-GENERATION CHINA).