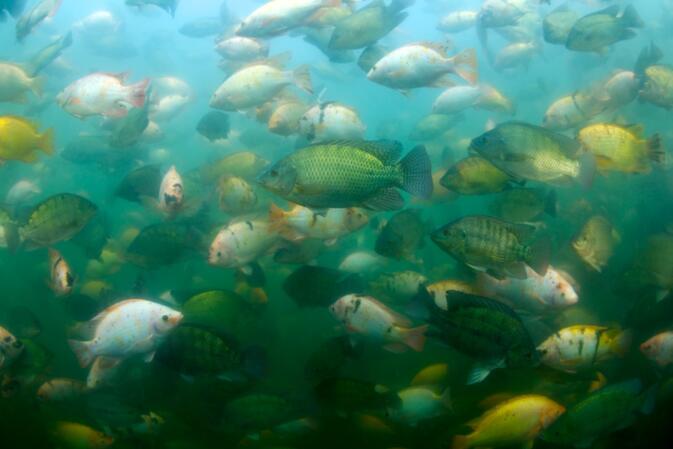 People familiar with Yunnan may be surprised to find the province is in the process of nurturing an aquaculture industry. The niche market increasingly involves raising tilapia in reservoirs originally created to produce hydropower. While still in its infancy, farming of the freshwater fish is being hailed as an industry for the future, one that can help diversify local economies and help supplement the incomes of poor farmers.

The vast majority of tilapia farming is being done in the province's southern prefectures of Dehong, Lincang and Pu'er, with a growing presence in Xishuangbanna. Fisheries are concentrated within these areas due to the climatic constraints of raising fish that were originally native to the heat of north Africa. Because much of southern Yunnan straddles the Tropic of Cancer, reservoirs there provide decent but not ideal conditions for cultivating large stocks of the fast-growing fish.

Tilapia is a blanket term for a family of fish called cichlids, whose meat has become one of the most popular sources of fish protein in the world. China is by far the world leader in farming tilapia, raising roughly one-third of the global total. Production had historically been limited to Guangdong, Guangxi and Hainan, until Yunnan introduced tilapia aquaculture in 2006.

A decade ago, tilapia yields in the province were slight, but growth has been steady and, for some, profitable. In 2015, fisheries in the province harvested 230,000 tons of tilapia — most of it filleted, frozen and shipped to markets in Africa, Australia and North America. That year, total sales from Yunnan tilapia fisheries surpassed one billion yuan (US$145 million) for the first time. Since then, the industry has continued to expand.

The growing popularity of Yunnan-raised tilapia stems from global worries over buying fish raised in other, more polluted parts of China. Although low on the food chain — and therefore less prone to amass high levels of heavy metals and mercury — China-grown versions in general are eyed with suspicion by many foreign buyers. Rampant reports of cost-cutting and feeding farmed fish manure instead of regular food have certainly not helped.

However, producers in Yunnan have embraced what they refer to as a more sustainable approach in their tilapia farming methods. By licensing the use of reservoirs, they argue, a constant supply of fresh water is always available, while endemic aquatic species help to provide a healthy working ecosystem free of the diseases that sometimes plague factory farm ponds.

Additionally, provincial laws stipulate that no more than 0.3 percent of a given body of water can be used to commercially grow fish, alleviating some fears surrounding overproduction and sustainability. Marketing manager of Yunnan-based New Ocean Group, Zhou Lei, recently expressed confidence in tilapia farming methods used in the province. Speaking to seafood media outlet Undercurrent News, he said, "I think we have attracted more customers in recent years because tilapia issues are well known. Not only in China, but all over the world. This is increasingly important to buyers."

Despite such optimism, prefectures in southern Yunnan have listened to the siren song of supplemental income schemes before. Most notably, this has taken the form of banana and rubber frenzies. Another silver bullet for raising poor farmer incomes has been coffee, with its wildly fluctuating international prices. Local and prefectural governments are now touting tilapia, an industry they say already employs 70,000 people across the province and adds an average of 3,400 yuan to annual individual incomes.