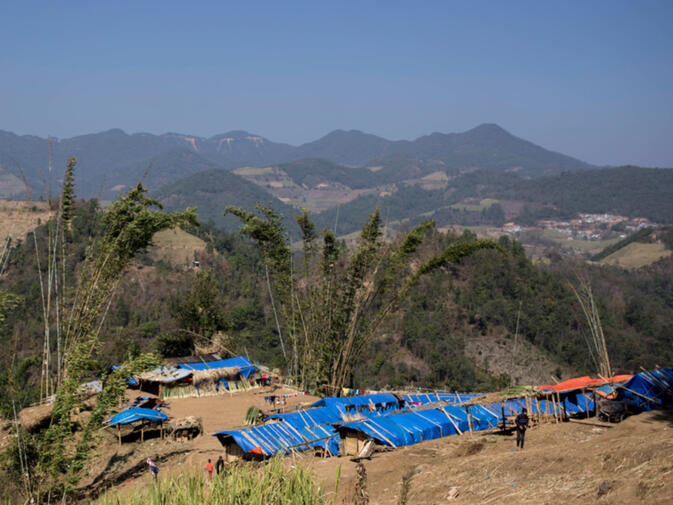 Fighting in northeastern Myanmar once again spilled over the border last week, leaving one Chinese man dead and several others injured. More than a week of intensified mortar and small arms exchanges near the Yunnan town of Nansan (南伞) have also sent tens of thousands of Burmese refugees into makeshift camps maintained by the People's Liberation Army and staffed by villagers from both sides of the border.

Sources confirmed to Chinese and foreign media outlets that a man surnamed Yang was killed when stray mortars landed inside China on the afternoon of March 9. At that time, an eyewitness described the situation to Radio Free Asia, saying, "There are still shells landing on the Chinese side of the border, and some people have been killed and others have been injured in the explosions. One Chinese person has died."

The renewed violence in Myanmar's Shan State is between government forces and the Myanmar National Democratic Alliance Army, the official name taken by guerrilla fighters from the Kokang ethnic group. Skirmishes have taken place in and around the Burmese town of Laukkai, or Laogai. The border crossing into the Yunnan hamlet of Nansan is now closed, as are the town's schools.

Despite the official way in being barred, between ten and twenty thousand Burmese refugees have flooded into the outskirts of Nansan over the past week. Most arrive on foot with few possessions, and Chinese authorities escort them to makeshift camps that have seen repeated use during similar armed flare-ups over the past eight years.

The disintegration of a 20-year ceasefire between Burmese army forces and Kokang rebels in 2009 has led to repeated and often bloody skirmishes based in the Kokang Self-Administered Zone. The small region of northeastern Myanmar spans 10,000 square kilometers and borders the Chinese prefectures of Lincang and Dehong.

Violent clashes over the years have repeatedly sent Burmese civilians fleeing into China for safety. The reuslting small humanitarian crises have strained bilateral relations between the two countries at a time when China is looking to its neighbors — many of them in Southeast Asai — to expand the ambitious Belt and Road Initiative.

In the most recent example, the Chinese Ministry of Defense vehemently denied shooting down a Burmese jet over Yunnan in late 2016. Only months before that controversy erupted, Beijing publicly upbraided Myanmar's ambassador when stray bombs from a Burmese fighter jet killed four Chinese nationals in the countryside south of Nansan.