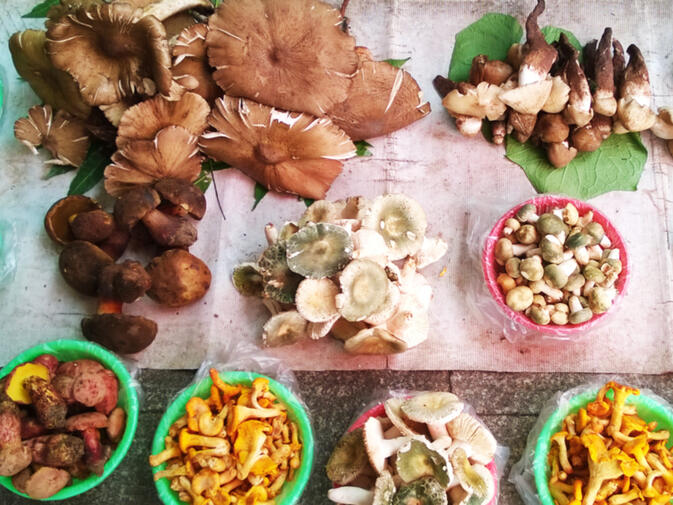 Mushrooms are a prime example of Yunnan's incredibly rich biodiversity. The province is home to over 850 different species of edible fungus. In other words, more than 40 percent of the world's edible species can be found in Yunnan, and local residents know how to make the most of such abundance. Many varieties sell for quite a bit, and in rural areas, people often make up to 70 percent of their annual income during the mushroom harvesting season.

However, the prices of many types of mushroom are dipping below historical averages. This is welcome news for those who love sampling the variety of flavors Yunnan's fungi have to offer, but probably the last thing those making a living off these fruits of the forest want to hear.

There are a few reasons for the drop in value for Yunnan wild-grown mushrooms, many of which are impossible to cultivate through normal agricultural methods. Weather is playing a key role in fluctuating prices this year. Due to the fact that there has been more frequent precipitation this year over years past, and also because the rainy season arrived sooner than usual, mushrooms began growing relatively early this summer. Higher temperatures than in previous years have also contributed to the abundance of fungal growth across the province. Due to the abnormally high supply, mushroom prices are dropping.

China's recent economic slump has also caused buyers to think twice when buying mushrooms, especially those kinds considered to be of gourmet quality. That is not to say that the higher-end mushrooms are cheap by any means. The highly prized matsutake — or in Chinese, songrong (松茸) — continues to be valued at around 450 yuan (US$67) per kilogram. In 2013, the export value of matsutake grown in Yunnan topped 260 million yuan (US$40 million).

Japan is the primary importer of these mushrooms. The species is highly popular on China's island neighbor, but Japanese production has heavily declined over the past few decades. Ganba mushrooms (干巴菌) are another gourmet fungus native to Yunnan, and continue to sell for hundreds of yuan per kilogram, even with this year's price drop.

The situation is more complex than a province-wide uniform drop in prices, and different locations are being affected in different ways. One woman selling mushrooms in Baoshan (保山) told reporters that her area has not seen any major changes from last year's prices. While jizong mushrooms (鸡纵菌) sell for 110 yuan per kilogram in Baoshan, 300 kilometers away in Chuxiong, the same species goes for 400 yuan.

A torrent of friendly reminders to be cautious of which mushrooms one consumes usually accompanies the beginning of the rainy season in Yunnan. Some species, especially in the genus Boletus, have similar appearances but very different interactions with the human body. When not properly prepared, some varieties of Boletus — known in Chinese as niuganjun (牛肝菌) — cause a range of symptoms including abdominal distention, diarrhea, nausea, dizziness, muscle aches, vomiting and in rare instances, multi-day hallucinations. Take the opportunity this summer to find discounted prices on some of the gourmet ingredients accessible to us in Yunnan, but make sure to bargain hard and take the appropriate precautions when preparing your wild mushrooms.