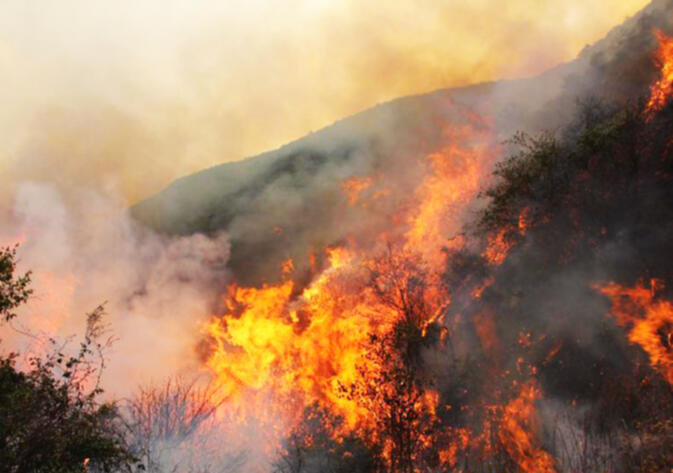 As the calendar ticked through the vernal equinox, Yunnan welcomed more than just warmer weather and extra hours of sunlight. Springtime South of the Clouds is characterized by two other seasonal phenomena, extremely low precipitation levels and powerful gusting winds. Conditions such as these raise the risk of wildfires significantly, underscored by twin blazes in Yuxi (玉溪) and Jianshui (建水).

Both fires broke out on Sunday, March 20, the first day of Spring. In Yuxi, a wildfire is burning in the hills of Chengjiang County (澄江县), an area known for prolific fossil beds. The fire originally broke out near Yangzonghai Lake (阳宗海), and while still small, the blaze has been characterized as "difficult to contain due to mountainous terrain" and unfavorable weather conditions.

It is also reportedly on the move west, with winds pushing the fire toward southern Kunming's Chenggong New Area. Local fire fighting detachments from both Yuxi and Kunming are coordinating efforts to control the blaze. They are being assisted by 300 men and women from the army, as well as an additional 200 volunteers from nearby areas.

In Jianshui, 150 kilometers to the south, another fire was reported on Sunday. It burned for two hours in a pine forest, as 100 people, assisted by a small helicopter air-dropping buckets of water from a nearby reservoir, eventually quelled the blaze. How either fire started is still not known, and investigations are underway. Provincial authorities remain hopeful forecasted rain showers may help slow, or even extinguish both fires in the next few days.

Yunnan is prone to wildfires, especially in the springtime. This was most evident during a multi-year drought that ended in 2014. During six years of abnormally low rainfall, almost no portion of the province was unaffected. Fires flared up outside of Lijiang and Dali, while others burned forests in Zhaotong and Lincang, in the northeast and southwest respectively.

Kunming was also repeatedly hit with fires menacing the outskirts of the city. One of the city's landmarks, Yuan Dynasty-era Bamboo Temple, narrowly escaped destruction in 2010 as surrounding eucalyptus woodlands burned. More recently, the forests of the Western Hills and Changchong Mountain both suffered serious damage from wildfires thought to have been caused by discarded cigarettes.

Typically, fire season in the Spring City is characterized by the often unannounced shutdown of mountain hiking and biking trails on the outskirts of Kunming. Such closures are usually accompanied by bans on burning incense in graveyards and governmental exhortations urging citizens to help prevent forest fires.

Discarded cigarette butts is the #1 cause of these fires.

Mainly thrown out while driving or being a passenger in a vehicle.

It's interesting to see the stands of eucalypts around Bamboo Temple have all turned white. I am Australian and I have never seen them turn white. I think they may have died during the winter. Dry-terrain trees at the best of time, and full of oils, they burn very well. Interestingly, this was also the site of a former fire in 2010 .. which I saw first-hand being up the nearby mountain cycling. I suspect the authorities may need to reconsider their choice of species for mass reforestation.