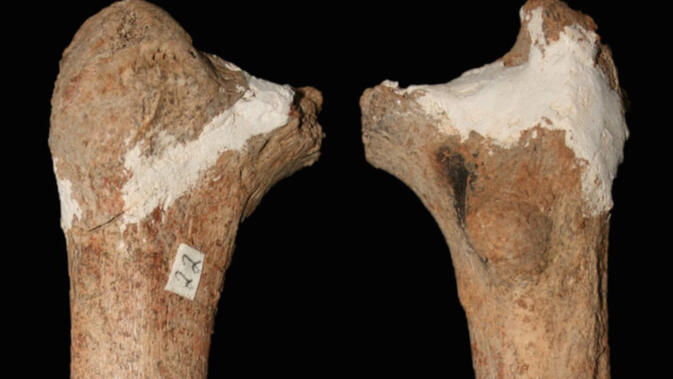 A 14,000 year-old femur first discovered in a Yunnan cave in 1989, is making waves in the realms of anthropology and human evolution. A study published online by peer-reviewed journal PLoS ONE indicates a species of hominid new to science coexisted with humans possibly down through the last ice age.

Lead scientists Ji Xueping of the Yunnan Institute of Cultural Relics and Archaeology and Darren Curnoe of the University of New South Wales authored the report. Their findings were based on a bone originally found by limestone miners in Maludong cave (马鹿洞) near southern Yunnan's Mengzi (蒙自). The femur bears more resemblance to extinct Homo habilis and Homo erectus than it does to modern man, according to the study.

The bone, which is extremely short when compared to human examples living at the same time, led researchers to estimate its adult owner was rather small, weighing roughly 50 kilograms. The new species, which lived during the Pleistocene epoch, has collectively been dubbed 'Red Deer Cave' people.

Speaking with a reporter from Haaretz, Curnoe said his research points to a new species, but, because only based on a single bone, requires more samples from a similar time period:

While our results seem clear that the femur is likely to be from an archaic human, we need to be careful, as it is only one bone. Still, if we take this single fossil as representative of the species in question, then there must have been extensive overlap in time between modern and archaic humans.

The existence of the Red Deer Cave people brings the number of hominids living concurrently with ice-age humans to two. In 2003, the remains of Homo floresiensis were discovered on the Indonesian island of Flores. That species, now accompanied by the individual found in Yunnan, call into question the once-accepted idea that modern humans developed alone for nearly 50,000 years after the extinction of other hominids.

Ji and Curnoe first published work on the Red Deer Cave people in 2012, describing their analysis of a fossilized skull. They found the species was characterized by a smaller brain case than modern man, with a thick skull featuring a prominent brow ridge and protruding jaw which contained large molars. The findings were more than two decades in the offing, as the fossils sat unexamined in a Yunnan museum until Ji and Curnoe first studied them four years ago.

As the date in the article mentions, this is old news. I went to Mengzi recently and the cave itself is just southwest out of town.

In general, southeast Yunnan was a very active area in prehistory, probably due to the biological diversity (rich hunting and foraging grounds) of the tropical river-valleys (not only the Red River, Yunnan's major prehistoric trade artery to the oceans), and the numerous ready cave-shelters provided by the partially dominant karst topography. See also the cliff tombs at Wenshan's Malipo and the many neolithic painting sites, some areas of which later became the Gouding culture en.wikipedia.org/wiki/Gouding

PS. French sources discuss overland routes to Kunming and beyond coming up the Red River valley then via Mengzi. Probably there is documentary evidence from the Qing Dynasty as to the volume of trade that went on. As far as its importance in the Ming Dynasty, you can read translated references to Mengzi in Geoff Wade's 'Southeast Asia in the Mingshilu' at www.epress.nus.edu.sg/msl/place/1157 ... still earlier, in the Tang Dynasty, the book known as the Man Shu that I am translating over at en.wikisource.org/wiki/Translation:Manshu may reference Mengzi under another place name (chapter one) but I am having trouble identifying some of the early toponyms. In any event, Mengzi is a natural plain featuring plentiful fresh water and was located at the southern end of the plateau stretching south from about Shilin, running parallel to the Nanpan River, to the east of central Kunming's lake plateaux. In prehistoric conjectural terms, it would have been a geographically likely location for settlement from an early period for this reason alone.

Caves were the basis of early hominids survival.

Necessary to remember that 14,000 years ago the world's climate, and Mengzi's climate, was a lot colder than it is today. Info from Tang & later times wouldn't, I think, reveal much about the period in question.