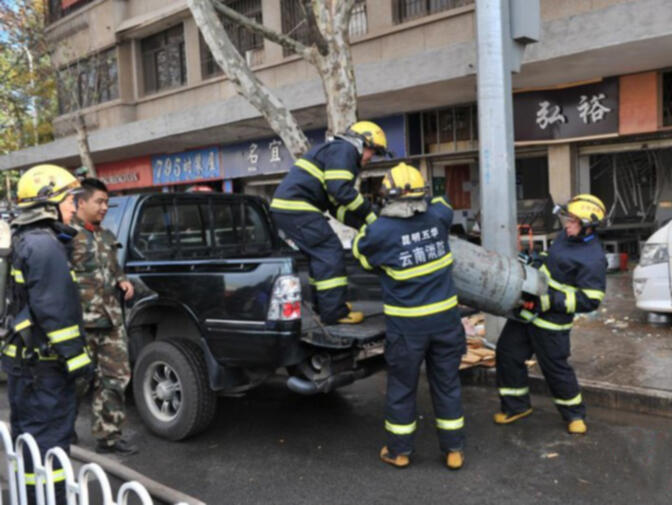 On the morning of December 14, just as the city was waking up and preparing for the day, an explosion destroyed a noodle shop in central Kunming. Twenty-one customers and passersby were injured when a propane tank detonated as it was being delivered. Fortunately, no fatalities were reported.

Early morning in Kunming is a time of traffic jams, people running to get to work and parents bustling their kids off to school. It is also when tens of thousands find time to throw down a bowl of noodles. More often than not, their choice is mixian, Yunnan's ubiquitous rice noodle dish.

Such was the case at 9:30am at the Abundant Garden (弘裕园) noodle restaurant near the intersection of Xichang Lu and Kunshi Lu. While several patrons huddled over bowls of noodles, workers from a gas delivery service brought pressurized canisters into the shop, exchanging depleted tanks for new ones.

During the transfer, one of the tanks exploded. Investigators have not determined what caused the blast, but assume a fuel cylinder somehow sprung a leak, causing the liquefied gas inside to ignite upon contact with the outside air.

The blast caused extensive damage to the noodle store and sent glass and wood shrapnel onto the sidewalk outside. Miraculously, only one of the 21 people injured suffered what paramedics deemed "serious" injuries. Owners of neighboring shops rushed into the restaurant to help those hurt in the explosion, while police stationed nearby moved to secure the delivery van filled with other full gas tanks parked on the sidewalk outside.

The accident could have been much worse if the shop were not situated in such a fortunate location. Abundant Garden is less than 100 meters away from a hospital, and those hurt in the blast — many of them able to walk on their own — were treated quickly.

Fuel canisters are used by thousands of businesses in Kunming, both in old buildings without proper access to gas line infrastructure, as well as in hotpot restaurants where individual tanks are situated under each table. Related explosions, both in Kunming and throughout China, are fairly common. A cursory news search on Baidu revealed no fewer than five fatal gas cylinder accidents in cities ranging from Chongqing to Xi'an to Shanghai in just the past four days.