Remains of WWII US pilots returned in Sichuan 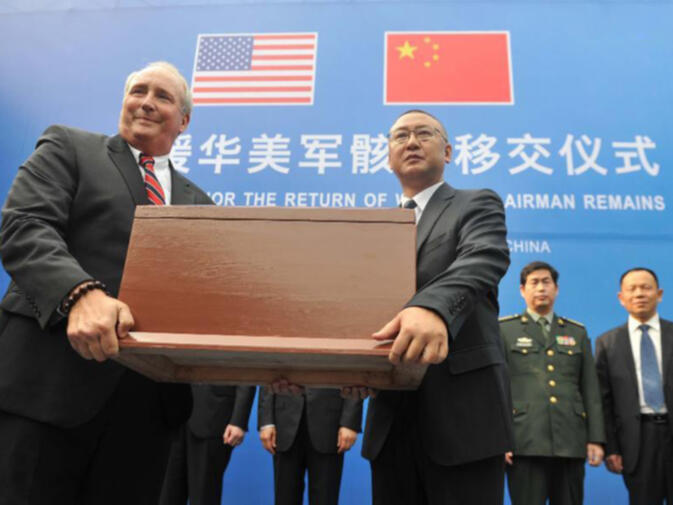 China handed over the remains of US pilots who supported the Chinese Army during World War II to representatives from the United States on October 22. During the handover ceremony, at Chengdu's Jianchuan Museum in the southwest province of Sichuan, Raymond Greene, consul general of the American Consulate in Chengdu, had the honor of covering the casket with an flag.

"United States-Chinese cooperation during World War II was crucial to the global efforts to defeat fascism," he told Xinhua. The remains are believed to belong to pilots tasked with transporting goods to southwest China along the famous WWII Hump air route. According to official files, a United States Army C-87 transportation airplane with five US pilots went missing in 1943 on its return route from Kunming, Yunnan Province.

The remains will be taken back to the United States where they will undergo DNA tests to see if they are the crew of this ill-fated flight, said Greene. Locals happened upon the airplane in 1993 at the top of a mountain in Bomi Country, Tibet. At that time, without the resources to move the plane, only the remains were brought down from the glacier. It was not until August 2015 that the wreckage and more remains were removed to lower ground.

The Hump route, which began in the southern Indian state of Assam, passed over the Himalayas to Sichuan. It was established in 1942 and closed in 1945. With 650,000 tonnes of goods transported via the route, it was a crucial channel in China's, then weak, war-time logistics system.

As a major airborne passage, the Hump route saw the loss of more than 500 planes and the lives of more than 1,500 US and Chinese pilots. Jay Vinyard, 92, remembers how dangerous the route was. On the evening of Jan. 6, 1942, he said, he was ordered to carry petrol from India to Kunming in Yunnan Province.

Heavy storms had cut off radio communication and navigation signals, and he was forced to fly blindly through the darkness. "When I saw the lights of Kunming, it was the most beautiful scene I had ever seen," he recalled. Later that night, he was told the US Air Force had lost nine aircraft and 42 crew.

The route was so treacherous that all pilots had a piece of cloth attached to their uniforms that had Chinese characters informing people who they were. Wang Shujun's father saved seven crew members in 1944. Wang, 80, lived in the township of Fulin in Hanyuan County, Sichuan, where aircraft plying the Hump passed every day. "I remember my father seeing a plane with black smoke; he knew that it was going to crash," Wang recalled.

Her father, Yang Renan, followed the plumes of smoke and found six Americans by a river, all injured. They lived in Yang's home for more than two months. "We had cooks at home, and we gave them five meals a day," Wang said. "The pilot asked my father if he needed to pay, my father said to him: 'You are here to help us fight the Japanese. How can I ask you for money?'."

Editor's note: This article was originally published by Xinhua.