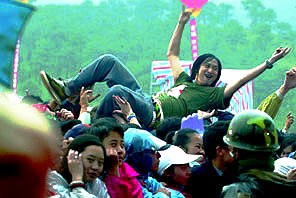 275Cui Jian# http://www.cuijian.com/ENGLISH/Pages/main_interface.html# - and dozens of other musical acts took to a rainy stage five years ago, Western media rushed to christen it 'China's Woodstock', a nickname that drew attention away from the festival's raison d'être - the music.

Now that numerous music festivals have sprung up in Beijing and Shanghai, it seems likely that this time the focus will be on the music. This year's festival will once again be headlined by Cui Jian and will also feature Zhu Zheqin (朱哲琴), Dao Lang (刀郎), Lao Lang (老狼) and an assortment of local Yunnan bands (including Strange Day and Beekeeper & Horse) plus ethnic minority performers from around Yunnan. Several international rock bands including French band Le Singe Blanc will also perform.

More than 50 bands are expected to perform at the foot of Jade Dragon Snow Mountain. Watch this space as October approaches for more announcements about the festival.