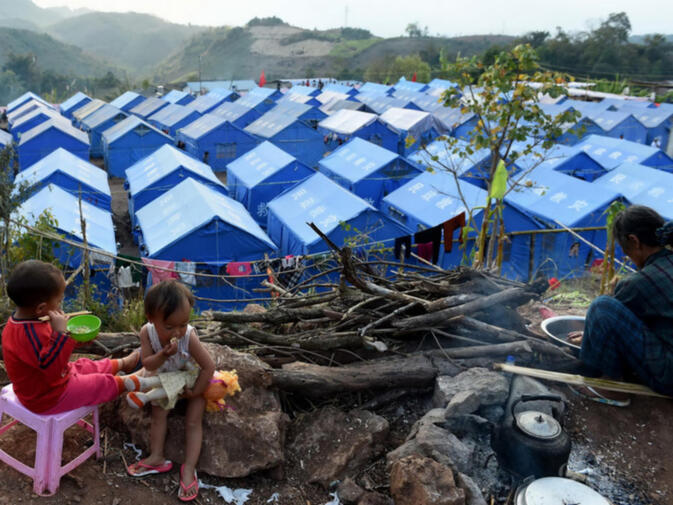 A Chinese camp for Burmese refugees in Yunnan's Gengma County

China has summoned Myanmar's Ambassador to Beijing following a Burmese air raid that led to the deaths of four Chinese citizens. The Burmese military is currently engaged in an armed conflict with the Myanmar National Democratic Alliance Army (MNDAA), centered on the Kokang region. Kokang lies on the border of Burma's Shan State and China's Yunnan Province.

According to a report from state-run Xinhua News Agency, four villagers from Yunnan's Gengma County were killed Friday afternoon while working in their sugarcane fields. Nine others were injured.

In addition, the Vice Minister asked for severe punishment for those involved and for the Burmese to take steps to ensure security in its border regions. The incident on Friday was the second of its kind in just a week. On March 8, an errant shell fired from Burmese territory landed on a house in Gengma County. No one was injured.

While the Chinese press has pointed its finger squarely at the Myanmar Air Force, the question of blame is not so clear cut on the Burmese side. An official with the office of the Myanmar president claimed that Burmese forces had informed the Chinese side of their air operations, which were carried out "strictly adhering to the information we told them".

"The targets of all our aerial attacks were inside our territory," the official, Zaw Htay, told Reuters in an interview. "It's possible that those fighting with us purposely created these attacks with the intent of causing misunderstanding between China and us ... We plan to explain it to Chinese diplomats after summoning them."

The 2015 Kokang Conflict began last month when MNDAA forces launched an offensive against the Burmese military. They attacked in an effort to retake territory lost in 2009 during a similar conflict with government forces. Like the 2009 conflict, this latest flare up has caused tens of thousands of refugees to flee across the border into Yunnan.

Before hostilities broke out in 2009, Kokang, a region largely populated by ethnic Han Chinese, had enjoyed a twenty year ceasefire. Myanmar has repeatedly accused the Chinese government of aiding the MNDAA with troops and materiel. Beijing has categorically denied such claims.

The MNDAA was formed in 1989 after the breakup of the Communist Party of Burma, an armed group which Beijing supported for decades.

This latest iteration of the Kokang conflict has done much to strain relations between China and Myanmar. Despite historically close ties between the two governments, Naypidaw's efforts to defeat simmering rebellions in its border regions have had consequences for bilateral ties. The 2009 Kokang conflict and the refugee crisis it created drew condemnation from China's Ministry of Foreign Affairs. Additionally, Burmese shells landed in Chinese territory during 2012 and 2013 as a result of Myanmar's ongoing conflict with the Kachin Independence Army.

Long Myanmar's only ally in the region, China has had to compete with other countries for Myanmar's favor following its implementation of reforms starting in 2011. However, whereas many have claimed Myanmar was distancing itself from China, the opposite may be true following this latest iteration of the Kokang conflict.

Additionally, these threats to China's border security could test its commitment to non-interference, a key part of its foreign policy. Will another incident provoke China to deploy troops to the region? Will China seek to mediate a ceasefire agreement in Kokang? Does this all mark a significant turn in Sino-Burmese relations? China's response in the coming days and weeks will help to answer these questions and more.

According to new reports from China Central Television, China Eastern Airlines has decided to cancel six flights to three cities in Myanmar: Yangon, Mandalay and the capital, Naypidaw. In addition, it is now reported that China has deployed fighter jets to the border region opposite Kokang.

Editor's note: The preceding article was written by William Feinberg and originally published on website East By Southeast (ExSE). It is reprinted here, with permission, in its entirety.

Any news if flights can go over Burma??

Says civilian flights are running again in Lincang. Would assume back to normal for KMG.